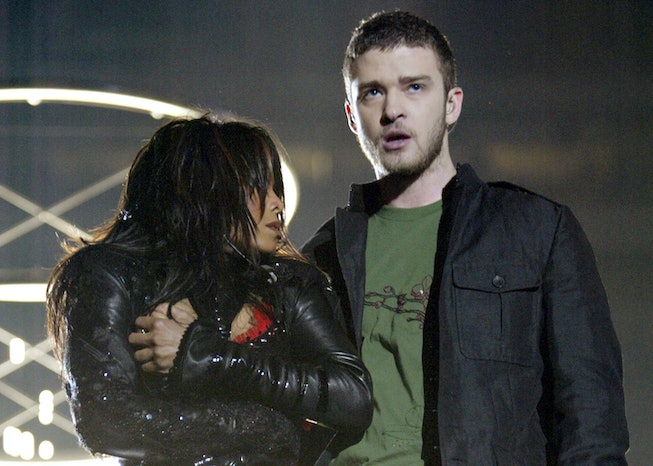 Since it first premiered, the Framing Britney Spears documentary has had an immense impact on public perception of Spears’ career and her current on-going legal cases. Revelations from the doc ignited a reckoning with how the press treated Spears, and also caused viewers to reconsider the role that Justin Timberlake played in his ex’s public suffering.

That performance included Jackson’s notorious “wardrobe malfunction,” during which Timberlake pulled off Jackson’s costume to reveal a pasty covering her otherwise bare breast. At the time, Jackson was crucified by the press for indecency during a national, televised sporting event, while Timberlake walked away relatively unscathed.

A source told Page Six, “It’s going to be all about the fallout and the suits who f–ked over Janet [at] Viacom,” the company that owned MTV — which produced the halftime show — and CBS, which broadcast the game.

“They’re reaching out to everyone who was involved: dancers, stylists, directors. Everyone,” said the source.

It’s not yet clear whether Jackson, 54 or Timberlake, 40, will participate in the documentary. Jackson is currently working on her own two-part documentary about her life, premiering on Lifetime and A&E next year.

“They did the Britney doc without [Spears], and there’s been more interest in the Super Bowl since that documentary premiered and Justin apologized to [both Spears and Jackson recently],” the source said.

After Framing Britney aired, Timberlake posted an apology note to both Spears and Jackson on social media.

“I’ve seen the messages, tags, comments, and concerns [on social media] and I want to respond. I am deeply sorry for the times in my life where my actions contributed to the problem, where I spoke out of turn, or did not speak up for what was right,” he wrote. “I understand that I fell short in these moments and in many others and benefited from a system that condones misogyny and racism.”

According to Page Six, the documentary will also cover disgraced former CBS CEO Les Moonves, who was widely reported to be “obsessed with ruining [Jackson]’s career.”

Left/Right is making the film with The New York Times, and it will also air on FX and HULU.