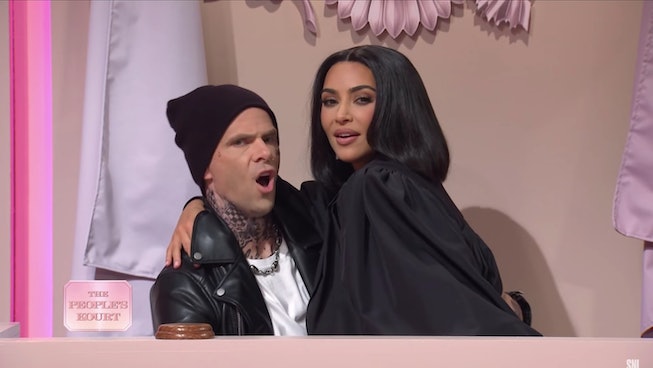 When it was first announced that Kim Kardashian (née West) would be hosting the second episode of Saturday Night Live’s 47th season, many were quick to stand up in protest, promising to boycott the installment due to the reality star’s perceived lack of qualifications. (Even Will & Grace’s Debra Messing chimed in, tweeting, “I know she is a cultural icon, but SNL has hosts, generally, who are performers who are there to promote...Am I missing something?”)

With so many stating their intentions to not tune in on Saturday night, one might’ve assumed that this weekend’s episode of the decorated sketch show would see record low viewership numbers. But you know what they say: never underestimate the powers of someone who can pull off two different Mugler looks in one night. As it turns out, Kim K actually drew in a larger audience than the show has had in a while.

According to Deadline, Kim’s episode drew in a 3.8 household live + same day rating. This number was up from last week’s premiere episode, which was hosted by Owen Wilson, who was a “performer there to promote,” in the words of Messing. (Wilson starred in Loki and can soon be seen in Wes Anderson’s The French Dispatch.) Throw in two musical performances by everyone’s favorite country star Kacey Musgraves (also there to promote her recent album star-crossed), and it would seem that you’d have an obvious hit on your hand. Well...not as big as the one you’d have with the eighth most-followed person on Instagram!

It doesn’t hurt that Kim has earned pretty rave reviews for her appearance, turning in a number of memorable performances in sketches about, amongst other things: The Bachelorette, Jasmine and Aladdin, Skims’ new line for “thick” dogs, and, of course, falling asleep at the club.

Nothing was off limits for the reality star, including her family members. In her hilarious opening monologue, the former Keeping Up With the Kardashians star made jokes about her sisters’ plastic surgeries and the failed political ambitions of Kanye West and Caitlyn Jenner.

But the funniest digs came in “The People’s Kourt” sketch, where Kim cosplayed as her sister Kourtney. Midway through, Mikey Day shows up as Kourtney’s very public boyfriend Travis Barker, and the pair get into some oddly specific kink play, which may or may not include an act involving Barker and a pair of sticks drumming “All The Small Things” on Kourtney’s ass. And with resident Timothée impersonator Chloe Fineman joining in as Megan Fox and Pete Davidson taking on Machine Gun Kelly, Kim got a lot of mileage out of jokes about the suddenly inseparable punk-rock quartet. “Wait. Why are we best friends,” Fineman, as Fox, asks at one point. “Because our boyfriends have tattoos for necks!” responds Kim, as Kourtney.

In the great words of the billionaire herself: Not bad for a girl with no talent!

Check out Kim’s “The People’s Kourt” sketch below.

NEXT UP
Culture
Phoebe Dynevor Will Not Return for Bridgerton Season 3
A Night Out
A Night Out With Rachel Bilson
Culture
6 Shows To Binge Once You've Finished 'The White Lotus'
Culture
Netflix Is Seriously Cracking Down On Sharing Passwords
Style + Culture, delivered straight to your inbox.