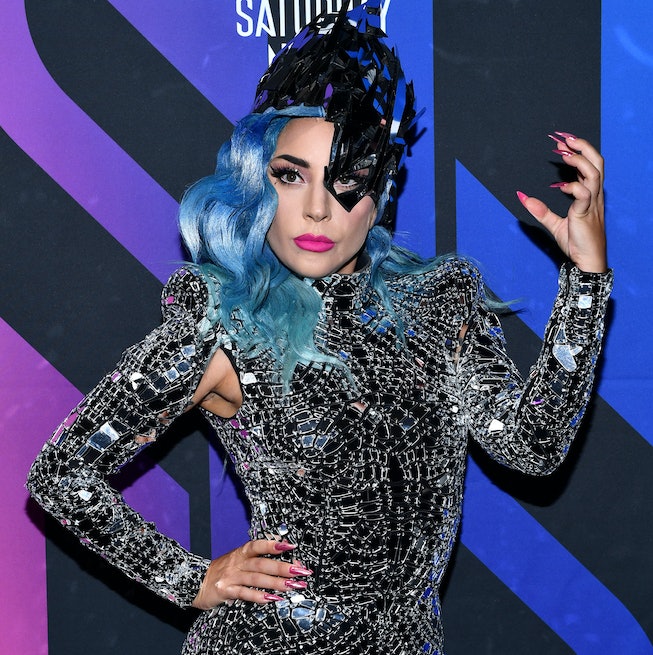 In one of her newest songs "911," Lady Gaga proclaims: my biggest enemy is me. But apparently, her biggest enemy was actually Bad Bunny! After all, it was El Conejo Malo who had occupied the top spot on Bloomberg's Pop Star Power Rankings for the past three months, and therefore, it was he that Gaga needed to dethrone to rise back to her former pop prominence. Now, it's official. According to the recently re-calibrated list, Lady Gaga has surged to the top spot, while Bad Bunny has fallen out of the top 10 completely, plummeting down to number 11.

Gaga's sudden rise is, of course, not too surprising. A month and a half ago, the Italian singer dropped Chromatica, her sixth solo studio album and her first since 2013's ARTPOP to reclaim the straightforward pop tropes that made her famous in the early aughts. (In the meantime, she released the Tony Bennett jazz standards duet collection Cheek to Cheek, the country-tinged Joanne, and the made-for-a-movie-soundtrack A Star Is Born.) A critically-acclaimed record full of back-to-back made-for-the-club dance hits, Chromatica sold the equivalent of 274,000 album units in its first week, easily nabbing the top spot on Billboard and becoming the biggest opening week for a female artist in 2020. And according to Bloomberg, the album kept up that momentum throughout its release month, becoming the biggest-selling album of June with a total of 400,000 units sold, while the next-ranked record failed to clear 300,000.

Spearheaded mostly by its two earth-shattering collaborations — "Rain On Me" with Ariana Grande and "Sour Candy" with K-pop juggernauts BLACKPINK, both which were released ahead of the album — Chromatica has also taken the streaming world by storm, becoming Gaga's "first true streaming breakthrough as a solo artist" (though Bloomberg does note that much of Gaga's career existed in a pre-streaming era dominated by physical album sales).

Judging by an accompanying chart, Bloomberg calculates its rankings based on a multitude of factors, including album sales, Spotify streams, YouTube views, 30-day tour ticket sales, and 3-month gross tour ticket sales. With the COVID-19 pandemic still rolling on, tour ticket sales have naturally not been counted, but Gaga did rank at #1 in both album sales and Spotify streams, only coming up short in YouTube views, where she was ranked #5. Nevertheless, it was still enough to shoot her to top of the list — which, if you ask me, is where she rightfully belongs at all times.

Now, if you need me, I'll be in my room listening to "Sine From Above" on repeat.

NEXT UP
Entertainment
On "Princess Diana," Ice Spice Beats The Memes
Entertainment
Chloe's "Pray It Away" & 9 Other New Songs Out This Week
Entertainment
Harry Styles Is Performing At The 2023 Grammys
Entertainment
Samia On 'Honey' & Saying The Ugly Part Out Loud
Style + Culture, delivered straight to your inbox.