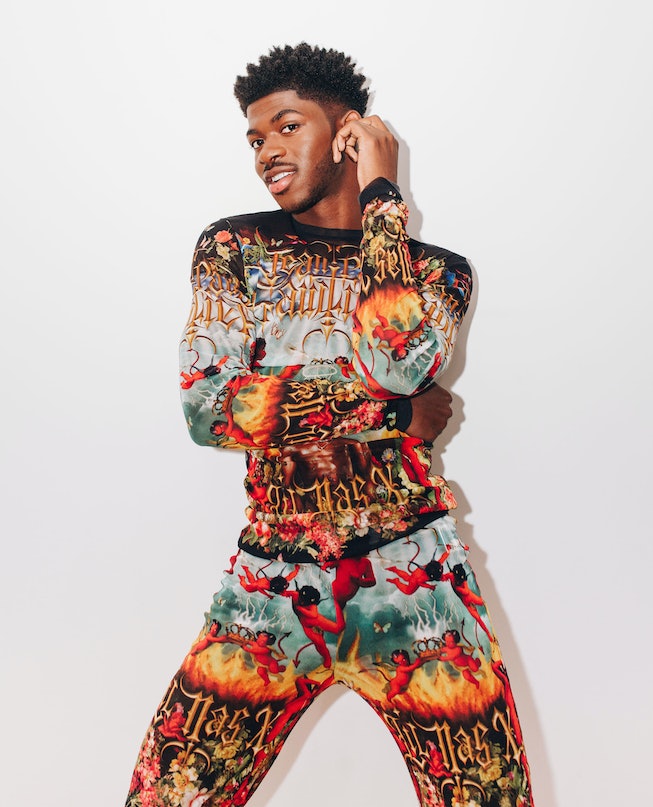 After capturing the internet’s attention all weekend thanks to the headline-making release of his highly-anticipated, long-awaited debut album Montero, Lil Nas X is making sure none of us stop talking about him. Earlier today, the chart-topping rapper revealed yet another high-profile offering: a high-fashion collaboration with none other than Jean Paul Gaultier.

Pegged to the release of Montero, which came out last Friday to rapturous critical acclaim, the new collaboration is a reimagining of the designer’s popular mesh top from the 1990s and early aughts — a style that has, in recent years, come back in a big way. JPG’s specific design with Lil Nas X remixes an archive print from the designer’s SS01 collection, Louise Brooks at Easy Rider, blending the label’s token “camp sensibilities” with Lil Nas X’s signature LGBTQI+ imagery.

Spotlighting both the rapper and the designer’s name on an allover Hieronymus Bosch-esque print of Lil Nas X’s signature religious-leaning Montero visuals, this special edition top is the perfect combination of vintage and new. According to a press release, the collaboration focused on incorporating the “gothic-glamour reference-heavy aesthetic” favored by Lil Nas X into “JPG’s cult-classic second-skin mesh top.”

If you’d like to rock your own version of the just-released ‘JPG x Lil Nas X Printed Top,’ as it’s been dubbed on the website, it will run you a healthy 333€ (about $390 in the U.S.). But don’t think you have time to hesitate either: As was the case with the rapper’s controversial “Satan Shoes,” the JPG shirt was fittingly limited to only 666 units, all of which went on sale today, September 20, at 6:00pm Paris time.

And while some may express surprise at the team-up between a 22-year-old American rapper and a 69-year-old French designer, the collaboration between the pair is actually an appropriately fitting one. Much of the praise surrounding Lil Nas X’s rapid rise has been centered on his dedication to living unapologetically as a queer Black man in a genre not typically known for accepting queer identity and ideology Similarly, Jean Paul Gaultier’s long career in high fashion has always thrived on his identity as one of the first openly gay designers to achieve real success and his brand’s sensibility for risk-taking displays of queerness.

To see them come together in this grand fashion? Gay rights.