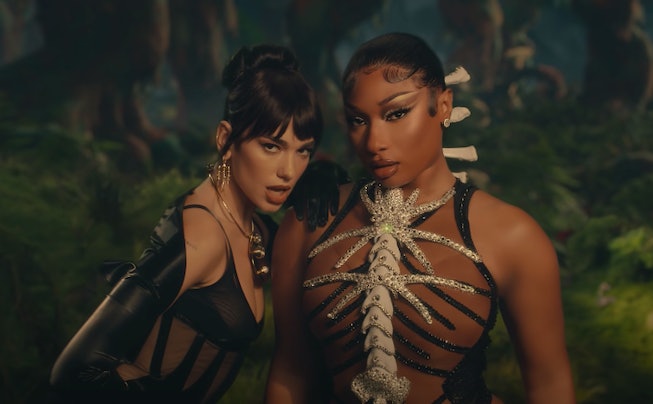 Megan Thee Stallion and Dua Lipa have teamed up for a wild ride on the “Sweetest Pie” video — which starts out sweet, but has plenty of bite.

The trippy video is directed by Dave Meyers (who’s also made videos for Kendrick Lamar, Normani, Drake, Ariana Grande, and Taylor Swift), and Meg is credited with the concept. The video draws on multiple fantasies, and has a vagina dentata vibe as Megan and Dua lure unsuspecting men to their forest treehouse — which seems appealing at first, but then includes surrealist touches like a spider crawling on Dua’s face, and a room full of dancing butts.

Megan told Apple’s Zane Lowe that she initially reached out to Dua for the collaboration after hearing remixes of their songs online. “I be seeing everybody making mashups of me and Dua songs and I'm like, ‘No, this sounds too good. We have to make a song,’” she recalled. “So when I hit her up about it, I was like, ‘Dua, I really want us to do a song, but I got to find that right beat. It has to be perfect.’ So I didn't just send her no any track. I waited till I had the perfect one and I feel like we both came to a mutual agreement that it was greatness. And now we got ‘Sweetest Pie.’”

She also praised the experience of working with Dua, saying, “It was just super easy the whole time, and I really liked that about her. Because she could be a diva, but she is just so humble. We are all divas in our own right. But what I'm saying is she was just very sweet. She was very kind. And I feel like right now, everybody is not like that. So shout out to a kind person in the industry because you don't meet a lot of them.”

Dua is currently on a North American Future Nostalgia tour, and Megan is opening for a few of her next dates. Meg’s also been busy, collaborating with Shenseea on “Lick” and her own freestyle compilation last fall, Something For Thee Hotties. She’ll also appear onscreen for the first time in A24’s take on The Parent Trap, F*cking Identical Twins, joining Nathan Lane, Megan Mulally and Bowen Yang.

Watch the video for “Sweetest Pie” below: