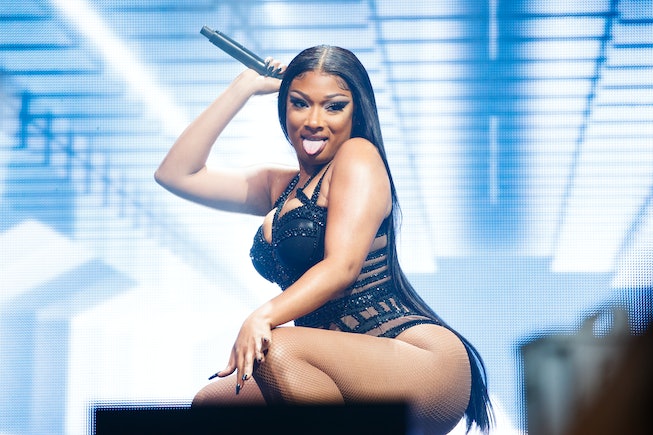 After months of rumors, the rapper confirmed in an interview with The Cut that she has a role in the She-Hulk: Attorney At Law television series on Disney+. While her exact role is still undisclosed, it’s rumored the Houston hottie will play a fictionalized version of herself in a few episodes.

She-Hulk is a scripted half hour comedy about Jennifer Walters, The Hulk’s cousin (who also has a penchant for turning green in fits of rage). The series also stars Mark Ruffalo, Benedict Wong and Tim Roth. Ginger Gonzaga, Josh Segarra, Jameela Jamil, Jon Bass and Renée Elise Goldsberry are also part of the cast.

Megan is already in the midst of a transition from musician to actor, with her role in A24’s first upcoming movie musical, F*cking Identical Twins, announced back in February. Meg will star in the movie alongside Nathan Lane, Megan Mullally and SNL’s Bowen Yang.

Speaking with The Cut, Megan shared that she sees stars like Queen Latifah and Ice Cube as her idols, indicating her interest in continuing a career in Hollywood beyond making albums.

The Traumazine artist also hinted at being in a possible Bring It On remake, which Gabrielle Union herself teased recently, saying that her iconic character Isis in the 2000 film could “have a daughter.”

Until then, catch Megan on She-Hulk, which is currently airing on Disney+ every Thursday. The first two episodes are out now.