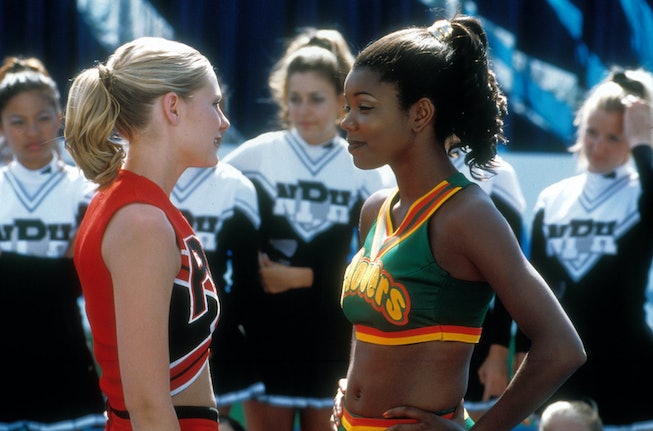 It’s been 22 years since Bring It On was unleashed onto the world, and even over two decades later, its imprint on the culture hasn’t dulled one bit. It’s central themes (about cultural appropriation, quasi-segregated schooling, and inequality in educational resources) have only grown more relevant in recent years, and its central stars (Oscar nominee Kirsten Dunst and Hollywood treasure Gabrielle Union) have only gotten more famous. (Also, lead love interest Jesse Bradford is…very much still Jesse Bradford — which is to say: he’s here and he’s perfect.) In the infamous words of Lindsay Sloane: when it comes to Bring It On…I’m. Still. Big. Red.

And with so much cultural cachet attached to one piece of IP, of course it was only a matter of time before rumors began to swell about a potential reboot. (Yes, I know there were technically five sequels to the original film — plus, an upcoming slasher take — but none of those feature any callbacks to the original. Therefore, they don’t count.) For Bring It On, the time may be now.

Last week, after MEFeater Magazine tweeted about the film’s 22nd anniversary, star Gabrielle Union quote-tweeted with what certainly could pass off as a hint about the possibility of an upcoming reboot. (Or would this classify as a sequel? Maybe it’s a spinoff? I don’t even know what to call them these days.) “Hmmmm so Isis might have a teenager,” the actress teased. She capped the tweet off with a number of cryptic emojis and a #BringItOn hashtag.

“Isis,” of course, refers to the character Union played in the original film — the talented team captain for the East Compton Clovers cheer squad, who gradually realizes that her choreographed routines had been regularly stolen by the former captain of their longtime rivals, the Rancho Carne Toros. Known for her no-nonsense attitude and commitment to originality, Isis was the secret hero of Bring It On (and provided a star-making turn for Union).

And well, let’s just say that if a reboot/sequel/spinoff were to be in the works, the casting director responsible for finding a new lead might have their work already done for them. In a new cover story for The Cut, rapstress-cum-actress Megan Thee Stallion cited Isis as a dream role. Expressing her desire to one day step into Union’s Halloween-favorite Clovers cheer uniform, Megan said, “I always have wanted to be Isis. I would be perfect for that. If they were ever to make a new Bring It On, I should be that character.”

And while Union’s tweet seems to hint at something that’s less of a reimagining and more of a continuation to the original story — most likely, with Union playing the mother of a new Clovers cheer captain — Megan’s interest in embodying Union’s iconic character is more than enough to pique my curiosity. (Look to P-Valley season two for evidence of Megan’s charisma in front of the camera, and stay tuned for her confirmed roles in Disney+’s currently-airing Marvel She-Hulk series and in A24’s upcoming musical comedy Fucking Identical Twins.)

In the meantime, let’s just hope that Gabrielle Union retweeting The Cut’s tweet about Megan’s cover story is a tacit endorsement of the rapper’s future casting dreams. We’d love to see it.