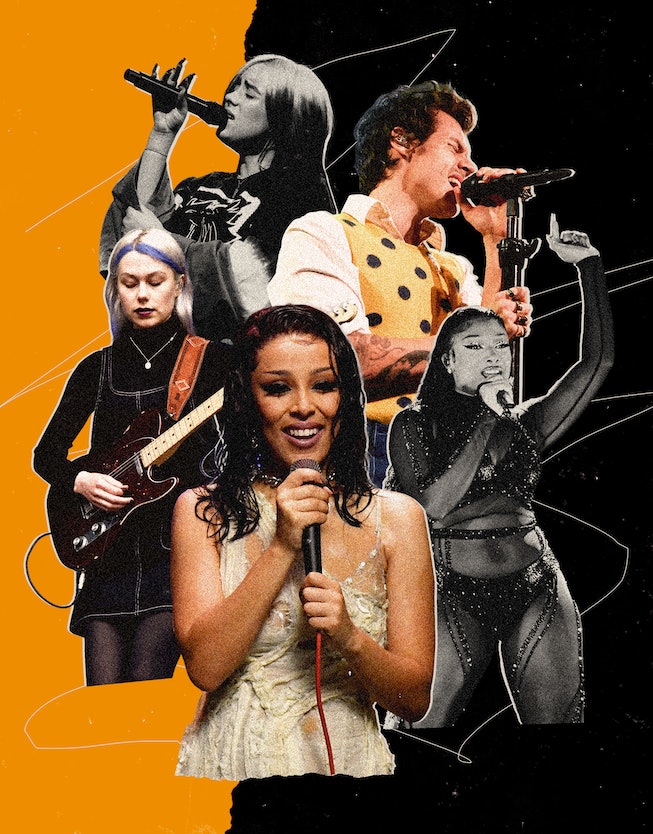 Here we are again on the eve of another Grammys. Last year’s show gave us the distinct thrill and privilege of watching Billie Eilish sweep the “Big Four” categories in a history-making moment. There’s no need to say we can expect this year’s ceremony to be a little bit different, for obvious reasons. COVID-19 is still raging on in many parts of the country despite ongoing vaccination efforts, but that doesn’t mean Sunday’s show isn’t going to be one to remember, either for its brilliance, or complete and utter failure.

You see, this year’s show runners — led by The Late Late Show With James Cordon’s Ben Winston, who’s filling the role of executive producer after Ken Ehrilch’s departure last year — have gone out of their way to create a completely new and socially-distanced format for this year’s ceremony.

Their ambitious plan includes five different stages set up in a circle inside Los Angeles’ cavernous convention center. You may be thinking, “That’s a lot of stages!” We agree. But here’s how the night’s supposed to go down, per Rolling Stone: One stage will be reserved for presenters and the night’s host, comedian Trevor Noah. The other four will be used rotationally by the night’s overwhelming roster of performers. A masked camera crew will be in the center, broadcasting it all. As Winston described it to RS, it’ll be “part-Grammys, part-Abbey Road studio session.”

The whole ordeal sounds potentially overwhelming as a viewer, and very, very expensive — but we’re staying optimistic! The best case scenario is that we’ll get a riveting three-hour show chock-full of elaborately set stages, plus all of the star-power Music’s Biggest Night can muster. The night’s confirmed list of performers is alone already impressive: Cardi B, Bad Bunny, Taylor Swift, Harry Styles, Doja Cat, BTS, and others are slated to grace the stages. Add in the possibility of women making historic wins in several of the genre categories, and Sunday night might deliver one of the more interesting Grammys in recent memory.

Below, the five things we’re most looking forward to on Sunday, from Harry Styles opening the show to a Fiona Apple acceptance speech, if we’re lucky.

Plus, with four full stages to fill, it’s likely that each artist’s performance will be decked out in set pieces and elaborate lighting. If all goes to plan, we expect the live broadcast will feel like being transported to different and complete worlds every time the shot changes.

Although there’s not much information on who will be performing what, the show runners have revealed that Harry Styles will open the show, likely performing “Watermelon Sugar,” which is nominated for Best Pop Solo Performance.

On Friday, the Grammys also teased that Megan Thee Stallion and Cardi B will be taking the stage together, likely making their live debut of their viral song, “WAP.”

We obviously don’t know whether Fiona Apple will win on Sunday, but the elusive singer-songwriter is up for three awards: Best Alternative Music Album for Fetch The Bolt Cutters, Best Rock Performance for “Shameika,” and Best Rock Song for “Shameika.”

Though we maintain that she also deserved nods in the “Big Three” general categories, we’re hoping the Recording Academy will finally give her her laurels, at least for her ground-breaking record Fetch The Bolt Cutters. If she does, we may even get to hear some more wise words from Apple, who’s historically used her acceptance speech to rightfully ruffle some industry feathers.

In what feels like a distinct change from years past, the 2021 award show includes more women nominated in all genre categories than ever before. The Best Rock Performance category’s nominees are all women, and women also lead the country genre nominations in an “unprecedented” moment of female dominance in the genre, Billboard points out. If all goes to plan, this means we’ll likely see a few women collecting history-making wins throughout the night.

And speaking of course-correcting longtime institutional discrimination, the Recording Academy also finally changed the Best Urban Contemporary Album category name to Best Progressive R&B, along with tweaks to other genre category names, so look forward to that on Sunday.

With a new executive producer running the show this year, it’s possible he’ll forgo this classic Grammys moment, but we’re hoping for camp and traditions sake that he won’t.

At least we’ll have the glam.

As we’ve learned coming into award season, if there’s one thing a celebrity’s going to do, it’s still dressing up to the nines even if they’re Zooming into a virtual ceremony from their couch. So if everything else fails to impress come Sunday, at least we’ll still have the glam and looks to count on. After all, that was easily the best part of the dreadful 2021 Golden Globes.