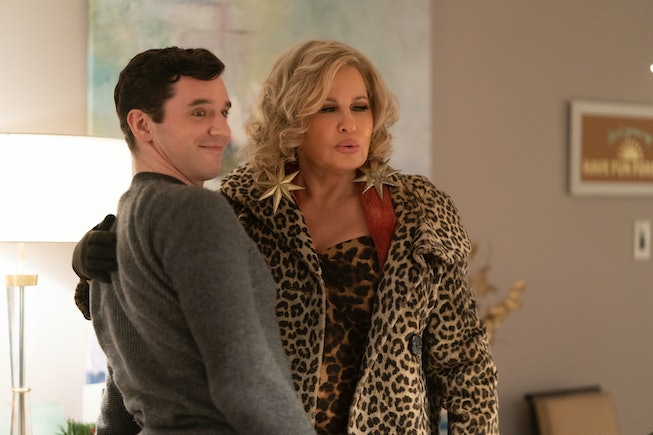 Just a year after Hulu premiered the Kristen Stewart-starring Happiest Season and everyone from Lifetime to Hallmark got into the Gay Christmas Rom-Com game, Netflix is finally coming around to join the crowd with an entry of its own. This holiday season, the streaming service will premiere Single All The Way, a new film starring Ugly Betty’s Michael Urie as a man desperate to not endure another Christmas holiday as the “single” member of his family. Though the film won’t hit our queues until December, Netflix is helping us get into the yuletide mood early by sharing a few first looks — and a new trailer.

In Single All The Way, Urie plays Peter, a single man who “persuades his best friend Nick to come home for the holidays and engage in a little fake dating to appease his Christmas-loving, ‘you should be in a relationship!’-nagging family,” according to Entertainment Weekly. The only problem? “Peter's mother, Carole, is planning to set him up on a blind date with her spin instructor, James, and all bets are off. Also in the mix: single Aunt Sandy.”

Netflix certainly didn’t take any chances when casting this project. Alongside Urie will also be Hocus Pocus legend Kathy Najimy as Carole, and (if there is a God), future Emmy-winner Jennifer Coolidge as Aunt Sandy. Love interest James will be played by Brothers & Sisters’ Luke Macfarlane, who is having a big queer rom-com moment between this and Billy Eichner’s history-making new film BROS. Newcomer Philemon Chambers will round out the cast as Nick.

Speaking to EW, Urie described his own character as “a self-described ‘plant gay’” and “the kind of Guncle who has spent many Christmases perfecting choreography to a Britney Spears Christmas song with his nieces.” According to the actor, Peter is “trapped in a social media job he doesn’t love.”

Of the film itself, Urie said, “You can expect pageantry, wine, hunky Santas, a little bit of deception, a whole lotta do-gooding, and Jennifer Coolidge.” He added, “Like any good Christmas movie, there will be decorating, there will be mistletoe, there will be sleeveless panel.”

But above all, he wants to remind us all that this film stars the one and only Jennifer Coolidge. (Have I mentioned that enough?) “Never have you witnessed a town Christmas Pageant cast with children, written/produced/directed by and starring Jennifer Coolidge,” Urie warned. “It’s the gayest thing to happen since Mariah!”

Welp, that’s a pretty high bar to clear. But if anyone is up to the challenge, it’s Coolidge.

Watch the first trailer for Single All The Way below:

Single All The Way premieres on Netflix on December 2.