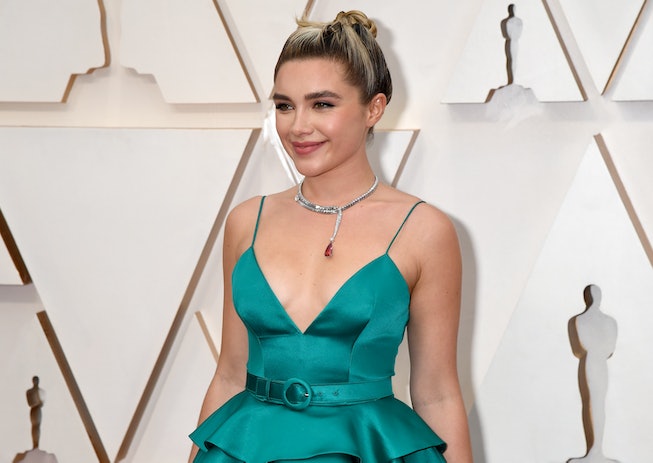 Florence Pugh, Shia LaBeouf, and Chris Pine all have experience starring in big-budget action films — as Yelena Belova in Marvel's upcoming Black Widow, Sam Witwicky in Transformers, and Steve Trevor in Wonder Woman, respectively. What they don't have experience doing? Starring in psychological thrillers directed by women. That will all soon change though, as this incredibly talented (and unnervingly attractive) trio will join forces to star together in Don't Worry Darling, the next movie coming from Booksmart director Olivia Wilde, who will also act in the film.

Details about the film are being kept under wraps for the time being, but, according to The Hollywood Reporter, the film "centers on a housewife who uncovers a disturbing truth about her seemingly perfect life." The screenplay was penned by writing duo Shane and Carey Van Dyke, whose interest in family-minded thrillers has been proven through their past work, like last year's The Silence starring Kiernan Shipka and 2012's The Sacred. With a setting of "an isolated, utopian community in the 1950s California desert," Don't Worry Darling sounds right up their alley.

Naturally, Pugh will star as the housewife, and based on her bone-chilling performance in last year's slow-burning Ari Aster horror masterpiece Midsommar, it's safe to assume that the Oscar nominee (who actually made Little Women's Amy March a likable character, a seemingly impossible feat) has the necessary chops to successfully lead this ensemble. With the accompaniment of LaBeouf and the Emmy-nominated Pine (in yet-to-be disclosed roles), as well as the directorial prowess of Olivia Wilde, there is plenty to get excited about. If this is even half as good as the uproariously funny Booksmart, we're in for a very special treat.

As most things in Hollywood, Don't Worry Darling has no set shooting schedule right now due to uncertainty about when the coronavirus will let up. But according to New Line, who acquired the film in a very competitive auction last August based on Wilde's involvement, the film will immediately begin production as soon as restrictions lift, making it safe and legal to do so. In the meantime, I'll just keep thinking about the fact that Shia LaBeouf was originally attached to play Oliver in Luca Guadagnino's Call Me By Your Name before the role ended up in the hands of Armie Hammer. Agh, what could have been!