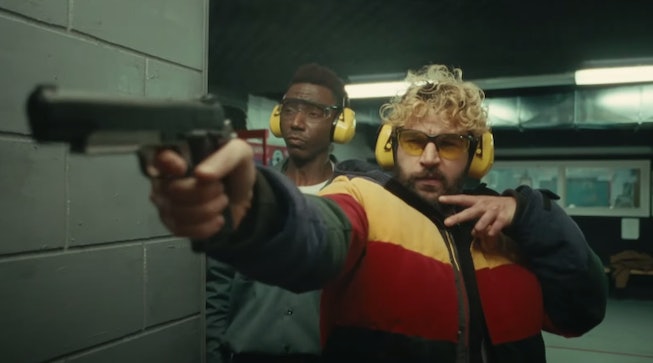 Warning: Discussion of suicide and mental illness below.

If you had plans to end your life, would you listen to Papa Roach’s on-the-nose suicide hit “Last Resort” on your way to do it? Well, Kevin, one of the protagonists in the upcoming Annapurna Pictures film On the Count of Three, would. But Val, the similarly struggling best friend who has agreed to end his life alongside Kevin, feels slightly differently. “You can’t listen to music that exactly describes the emotional thing you’re going through. Do you know how cheesy that is?” he rhetorically asks his mate-in-death. “I don’t listen to Alanis Morissette when I’m going through a breakup, and I’m not listening to Papa Fucking Roach on the day I’m going to kill myself.”

Starring The Carmichael Show’s Jerrod Carmichael and Girls’ Christopher Abbott as Val and Kevin, respectively, On the Count of Three has been described as “a darkly comic feature about two best friends on the last day of their lives,” according to a press synopsis. Or, according to another: “Two guns. Two best friends. And a pact to end their lives when the day is done.”

In wider terms, On the Count of Three follows Val and Kevin, two severely depressed best friends who form a suicide pact before agreeing to spend the rest of the day getting everything in order for their deaths. Alas, just like the pair bicker over how to properly soundtrack a death mission, Kevin and Val also have different ideas about how they should process their lingering grief and trauma. Naturally, things don’t necessarily go according to plan. In addition to Carmichael and Abbott, the film’s cast includes Girls Trip’s Tiffany Haddish, Barry’s Henry Winkler, Curb Your Enthusiasm’s J.B. Smoove, Breaking Bad’s Lavell Crawford, and Awkward’s Jared Abrahamson. The film premieres in select theaters and on digital platforms on May 13.

Penned by The Carmichael Show co-creator Ari Katcher and Ramy writer Ryan Welch, On the Count of Three marks the directorial debut of Jerrod Carmichael, who, of course, pulled double-duty as the film’s star. The actor, writer, director, and comedian has been riding a media high for the last several weeks, ever since his critically-acclaimed HBO special Rothaniel dropped at the beginning of the month. In Rothaniel, Carmichael brought his trademark laidback sense of humor to an audience at New York’s legendary Blue Note Jazz Club, regaling them with stories of his childhood before finally coming out publicly as a gay man. Carmichael would later address the emotionally poignant moment during his hosting gig on Saturday Night Live, where he delivered what has still proven to be one of the best opening monologues in recent memory.

After first premiering at Sundance in 2021, On the Count of Three couldn’t be arriving at a better time for its director and star. Following its digital premiere, I “crowned” Christopher Abbott as the festival’s “MVP of the Week” thanks to his performances in this film and in The World to Come. Playing a “dejected mental patient just trying to make it through the day,” Abbott’s performance served as “a testament to the 35-year-old actor’s range.”

Check out the pitch-black trailer for On the Count of Three below.

On the Count of Three premieres in select theaters and on VOD on May 13.