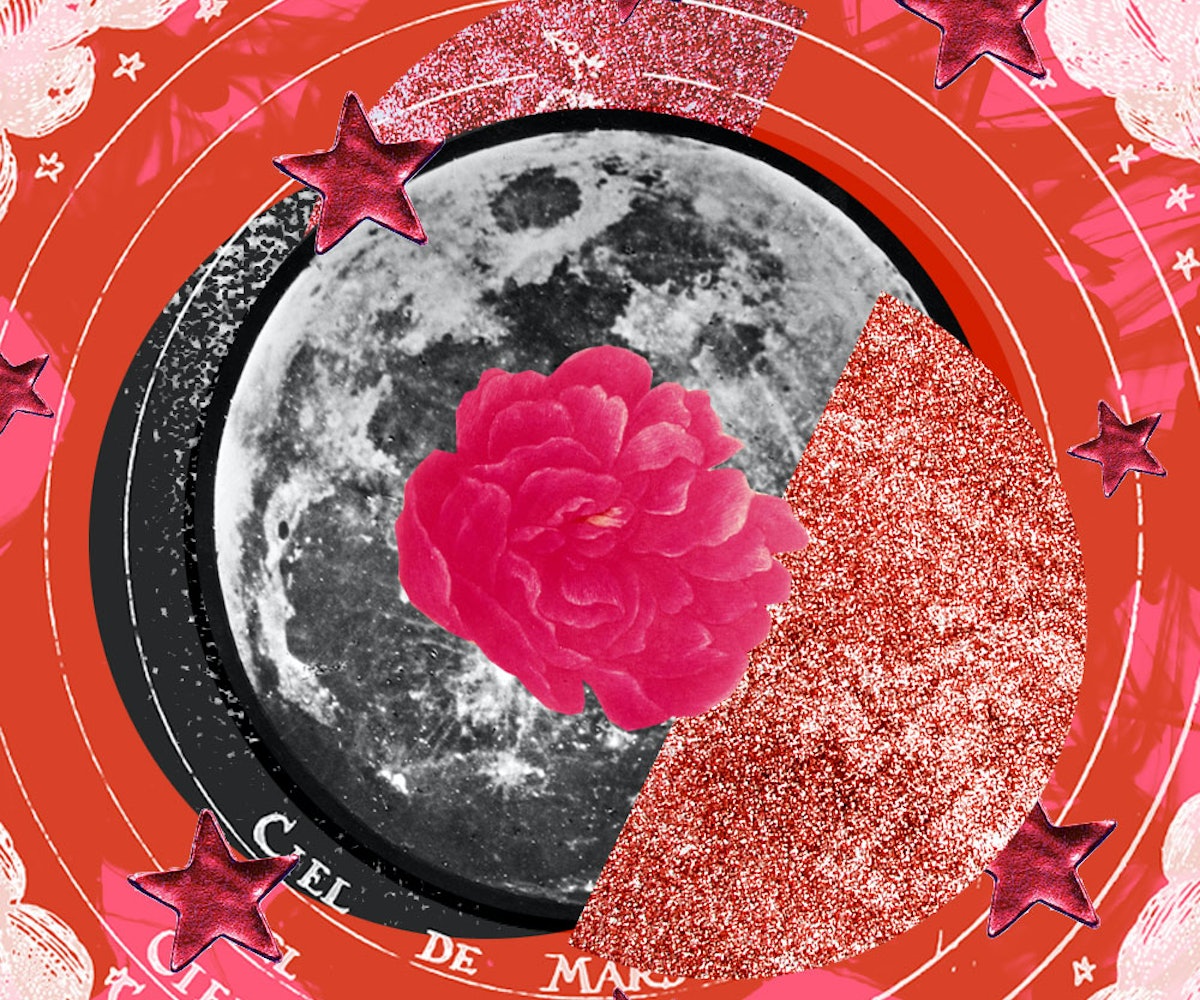 Real talk: There is so much magic in bleeding. Eons before Tampax or even our beloved Diva Cups became staples of menstruation, women across cultures found ways not only to cope with the physical discomfort and emotional upheaval associated with symptoms of a monthly period, but also to embrace its power and beauty. (Yes, I said beauty.)

Early societies respected the menstrual flow and its connection to lunar phases and the natural world, ritualizing bleeding as a time of rejuvenation, purification, rest, and creativity. As patriarchal society bucked the divine feminine, the ancient moon lodges and women's community circles masterfully illustrated in Anita Diamant's bestseller The Red Tent were replaced with shame and uncleanliness (don't even get me started on the smear campaign against midwifery).

And just like that, getting your period went from a rite of passage into a new month filled with creative possibility — literally, to create babies and new life! — to a resented curse and feared taboo (hello, misogynistic tropes of the raging PMS beast-woman).

Honoring your period can be a healing, cathartic, and — dare I say — fun way to reconnect with your body, your creative force, and nature. Ahead, from moon charts to massages, more ways to bring back sacred menstruation for the modern age.

Women have been looking to the sky for cues about their fertility for ages, and it’s even believed that the first calendars were created as a result of charting ovulation and menstruation. Since the lunar cycle lasts 29.8 days, it made sense that it would align almost perfectly with the menstrual cycle.

By tracking your period and your body’s changes throughout the month, you’ll gain a better idea of when to expect Aunt Flo and a clearer understanding of your body’s unique rhythms. Jot down your cycle — when you’re bleeding, when you experience PMS or PMDD symptoms, and about 14 days later when you are ovulating — in a good, old fashioned journal, calendar, or agenda book. Many calendars and agendas will already have icons for lunar phases, but if you’re more tech-inclined, My Moontime is an excellent smartphone app for tracking your menses and the moon.

After keeping track of your body’s cycles for a few months, you’ll know whether you tend to menstruate around the new moon — the beginning of the lunar cycle — or the full moon, which is the end of the month’s lunar cycle, or the waxing and waning periods in between. Some believe that periods should align with the new moon, since the dark-moon phase is so closely associated with rest and withdrawal for self care. Still, there’s no “correct” moon phase to bleed with, and personally, I feel much freer allowing my body to go with the flow (all puns intended) and observe how I align with the moon.

According to Miranda Grey, author of Red Moon—Understanding and Using the Creative, Sexual and Spiritual Gifts of the Menstrual Cycle, there are two traditional menstruation patterns: “white moon” bleeding, or menstruating with the new moon and ovulating with the full moon, and “red moon” menstruation, bleeding with the full moon and becoming fertile with the new moon. Your period will attune to both cycles over the course of your life, but it’s fascinating to note what’s going on in your life energetically as your body cycles. So, what is your body trying to tell you?

SYNCING YOUR PERIOD TO THE MOON

Now that you know your cycle a bit better, you might find that you prefer to bleed with the dark moon and ovulate with the bright, full moon. Luckily, there are ways to realign your cycle’s energy over time.

Obviously, light plays a huge role in our bodies’ natural rhythms, and with smartphones, computers, TVs, and artificial-light pollution, it’s no wonder most of us are out of whack. So, the first step to get in sync is to align your circadian rhythm: Keep your home light during daylight hours, preferably with sunlight, and dark during nighttime. During the daytime, try to wear sunglasses as minimally as possible — especially during ovulation — and keep lights dim and soft at night.

Moonlight plays a huge role in our monthly rhythms, regardless of whether you live in an urban or more rural area. Sleeping with a 100-watt light bulb on during the five to six days of the full moon — and sleeping in complete darkness for the rest of the month — has been shown to regulate menstruation. Just being in natural moonlight is incredibly healthy, physically and energetically, so take time to appreciate Luna during the full moon. Hang out outside, take a walk, or just open the blinds during her five days of brightness, and you’ll feel a change.

Yup, getting back to nature can be as simple as opening your bedroom window. No matter the season, allowing natural air to circulate is essential, along with taking in the sounds of birds, trees, and the weather. Keeping several houseplants in your bedroom is another brilliant way to up the ante on nature’s presence in your home and in your cycle.

SELF CARE DURING YOUR PERIOD

No matter when you menstruate, it is essential that you reclaim the time of your period as yours and yours alone, in whatever unique way you see fit. The first three days of menstruation are the most intense energetically, and it’s okay to give yourself a pass to take it easy, work from home, or cancel plans during this time.

Listen to what your body is telling you; if you want to be alone, be alone, and if you want to go out, blow off some steam with your friends at the bar, then go for it. Some women abstain from physical intimacy during menses to guard their physical space, while others are hornier than a frightened porcupine (hey, it’s your hormones raging!). Don’t be shy to let others know what you need during this time; tell your roommate you’re on edge, your partner you need nurturing, or your parents that you need some space — a little understanding goes a long way.

For those with normal periods, menstruation is a helpful message from your reproductive system letting you know that all’s well and healthy. Energetically, periods can be a time of massive emotional release. Think of all the crap you’ve endured during the previous weeks — disappointments, excitements, stress, anxiety, sadness, even contentment — our bodies absorb those emotions’ energies like a sponge, and it’s widely believed that menstruation is a powerful time of purging those toxins.

Many of us find that we’re emotionally fraught during this time with rapid mood swings, and that’s okay. There’s no shame in crying to Adele, laughing at reality TV, or having to scream into a pillow. Allowing yourself to feel all the feelings will clean the slate and rid you of the pent-up emotions you’ve sucked up, strengthening you for the next month’s challenges and leaving you more in touch with how different emotional energies affect you in the long run.

You likely have your own rituals in place for your period (hello, Oreos-and-Netflix marathons, anyone?). Embrace those, and don’t be afraid to go a little nuts with self-indulgence. Shut the world out and finally use that Lush bath bomb this month, buy yourself a trinket that gives you a thrill, and don’t you dare feel obligated to restrict your diet, unless of course you have a medical condition that requires that.

I make sure that my budget allows for a monthly “menstrual massage” at my favorite spa, and I take time out from real life to read quietly, do a home facial, and nap. Those who love altars may find comfort in decorating theirs with red roses or other symbols of fertility, feminine power, and bleeding. And, if you use a Diva Cup or other menstrual cup, you can save your menstrual blood (stay with me, people), dilute it, and water your houseplants with it — a mini-ritual based on ancient rites of collecting menstrual blood and sending it back to Mother Earth.

NEXT UP
Astrology
Your Natal Saturn Placement In Astrology, Explained
Astrology
Your December 2022 Horoscope Fuels The Reboot
Beauty
10 Sagittarius-Inspired Nail Art Ideas For the Headstrong Season
Ask A Witch
Ask A Witch: How To Survive The Holidays With Hoodoo Magic