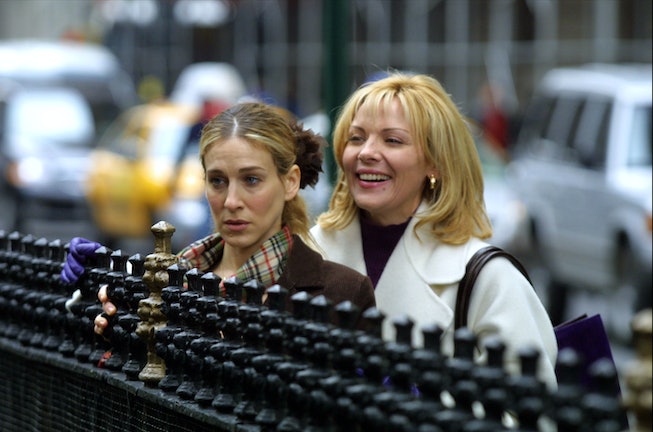 Much has been written, podcasted, tweeted and talked about And Just Like That, the Sex and The City reboot nearly 20 years in the making, and no question has been more considered than whether Kim Cattrall would reprise her famously sex-positive publicist character, Samantha Jones.

Though it’s been clear for awhile that Cattrall had no intention of returning to the show, following decades of rumors of a feud between her and the rest of the cast, now Sarah Jessica Parker herself has addressed the situation with uncharacteristic bluntness.

Speaking to AJLT creator Michael Patrick King for Variety, Parker said that not only did they not ask Cattrall if she wanted to be part of the reboot at all, but she’s not sure she would even want her to be.

“We didn’t go to Kim for this, you know,” Parker said to King. “After we didn’t do the movie and the studio couldn’t meet what she wanted to do, we have to hear her and listen to her and what was important to her. It didn’t fit into what was important or needed for us.

“There’s a very distinct line between Samantha and Kim,” Parker continued. “Samantha’s not gone. Samantha’s present, and I think was handled with such respect and elegance. She wasn’t villainized. She was a human being who had feelings about a relationship, so I think we found a way to address it which was necessary and important for people that loved her.”

In the reboot, Samantha has moved to London after Carrie fires her as her publicist, and the two have a falling out. Throughout the season, Carrie repeatedly reaches out to Samantha over text, and (spoiler alert), in the final scene of the finale, Carrie and Samantha agree to have drinks. A season two of AJLT isn’t confirmed yet, but even if it were, it seems unlikely that this scene would actually play out, and Parker and King said as much.

“Magically thinking, it’s great to have Samantha,” King told Variety. “I have no realistic expectation of Kim Cattrall ever appearing again.”

When asked if whether, by “some miracle,” Cattrall did want to play Samantha again, Parker would be okay with that, she said, “I don’t think I would, because I think there’s just too much public history of feelings on her part that she’s shared. I haven’t participated in or read articles, although people are inclined to let me know.”

Over the years, Cattrall has implied that she and her Sex and the City co-stars didn’t necessarily get along, telling Piers Morgan in 2017, “We’ve never been friends. We’ve been colleagues and in some ways it’s a very healthy place to be because then you have a clear line between your professional life and relationship and your personal.”

Parker, however, has insisted that there is no feud — or implied that if there is, it’s been one-sided. In 2018, she told Vulture, “I’d just like to remind everybody that there is no catfight. I have never uttered an unkind, unsupportive, unfriendly word, so I would love to redefine it.”