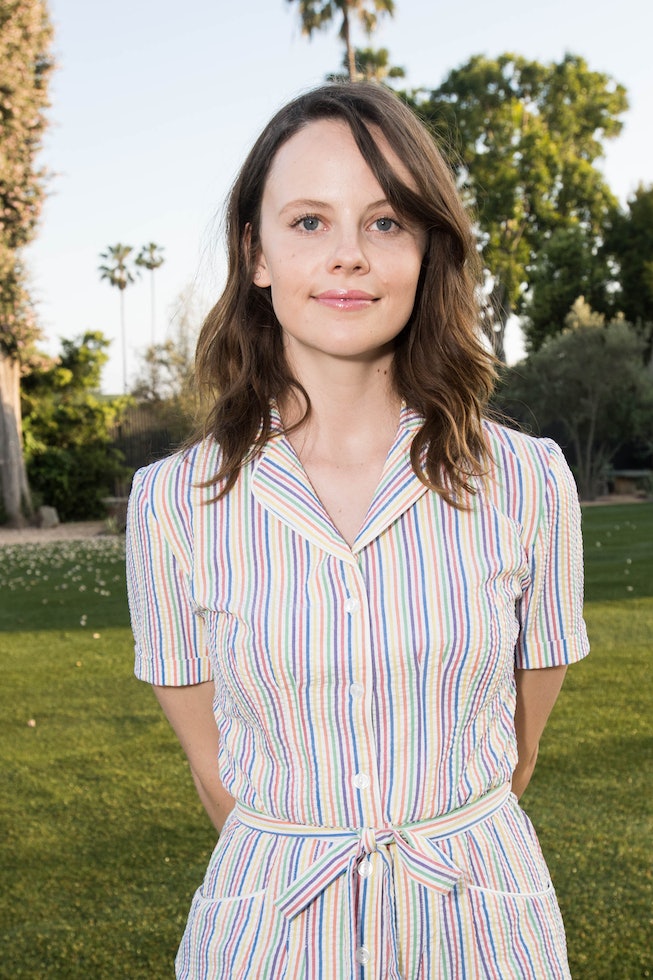 While self-isolating in quarantine, plenty of us have embraced the comforts of watching something nostalgic on Netflix, Hulu, or whatever your streaming app of choice. Sarah Ramos is doing one better: She's taking those scenes and remaking them beat-for-beat on Instagram in the aptly titled series she's called "Quarantscenes."

Over the past few weeks, the actress has posted such iconic scenes as Megan Fox's bitchy teen queen moment in the Mary-Kate and Ashley classic Holiday In the Sun to Jughead's "I'm a weirdo" monologue from the first season of Riverdale, all filmed by herself while quarantined in Los Angeles with her fiancé, Matt Spicer. The idea first stemmed pre-COVID-19, when back in November, she started with — as all good nostalgia-driven projects do — a scene from Bring It On, that she posted on then-burgeoning TikTok. "I was like, 'Is this what people do on TikTok?'"

The clip picked up traction amongst her friends and fans, so with some free time on her hands in quarantine (she's also been working on a podcast with Caroline Goldfarb of @officialseanpenn), she revived the series. "People have responded so nicely and it was so fun to do that I thought, 'Why don't I keep doing it?'," Ramos said over the phone from L.A.

After teaming with friend Aubrey Plaza on a scene from Showgirls, this week, Ramos is debuting her second collaboration — this time with Tavi Gevinson. Together, the pair took on the heart-wrenching fight scene between Scarlett Johansson and Adam Driver from 2019's Marriage Story, which you can see exclusively here on NYLON, and read on as Ramos talks about how she picks each scene, being an "OG Olsen fan," and her dream acting partner.

How long does it take you to create each scene?

The filming takes an hour, hour and a half. What really takes the time is dropping all the footage in and getting everything organized. All-in-all, it takes four or five hours, but I really spread it out, so I'm chilling and doing an hour here or hour there.

How are you selecting what scenes you are going to do?

I started with Bring It On because I wanted to start with scenes that I had memorized, which was that Bring It On scene and the funky spunk scene from Sex and the City; I had previously been so bemused by it that I took it upon myself to learn the Samantha part. I had also memorized Megan Fox's iconic line from Holiday In The Sun, "I get what I want and this winter break, I want Jordan."

It really is an iconic line.

The person who runs the OlsenObsessed Instagram told me I was an OG Olsen fan because I went on the Mary-Kate and Ashley cruise in 2001. But that's besides the point. I'm hitting different demographics because my fiancé is a little bit older than me, and his friends are too, so they were like, "Holiday In The Sun? What's that?"

Is your fiancé helping you at all on these?

He's my camera man, and a little bit of my gaffer. On the Riverdale scene, we needed a balance for a light, and I happen to have a Timothée Chalamet cardboard cutout, so we used Timothée Chalamet's head to bounce the light off.

How did you start getting your friends involved to act as your co-stars?

The first person I did a scene with was Aubrey Plaza, who is my North Star. She lights the way for all us weirdos. I FaceTimed her and she was like, "Can we do one?" Which, made me feel blessed beyond all measures. So we did Showgirls. I've definitely had better luck with people who want to do a scene with me, versus people I've asked.

How did you settle on Marriage Story for you and Tavi?

I've been going in a '90s, 2000s direction. I just did A Cinderella Story, which was a suggestion from Georgie Flores. I felt like I needed to branch out and veer away from that to show a different side of me — keep people on their toes.

Your portrayal of Adam Driver is genius, even based on just the hand acting alone. How many times did you have to watch the actual scene before you filmed?

Not that something like Riverdale isn't Oscar-worthy, but doing a scene that was actually nominated for an Oscar, did you feel more pressure to live up to his performance?

I always go through a phase of high confidence right before performing. In my head, I see Adam Driver, so when I'm doing it, I'm like, "I am Adam Driver." Then when I watch back the footage, it's like, "Oh god, you are not Adam Driver." There's definitely an element of, "This was a huge mistake." But it usually comes back around.

Did you give Tavi any direction for Scarlett Johansson's part? Her vocal fry is spot-on.

She'll be so happy to hear that because she really focused on the vocals. I told Tavi to leave a little breath beside each take, because when you do a series, you want to say, "You're such a dick" over and over again, but I have to be able to edit.

Have you tried to do any scenes that just didn't work?

I really wanted to do a scene from Charlie's Angels. I had great cast ideas for Cameron Diaz and Drew Barrymore and Lucy Liu and maybe I'd play Demi Moore, but there is just too much action. It's really tough to do in quarantine.

Are there any scenes that you think are perfect as is that you wouldn't even try?

Some comedy stuff. For example, people suggested I do that amazing scene in Mean Girls when Lizzy Caplan is in the car freaking out at Lindsay Lohan. But you don't want it to fall flat and for people to be like, "It was funnier in the original."

Has anyone from the original scenes that you've recreated seen your version?

Somebody I know showed the Showgirls scene to Gina Gershon, and she was pro it. Very exciting. I did get the Olsen stamp of approval from Lizzie Olsen, which is a pretty big deal.

The Riverdale video has so many views. Did you get a lot of big Riverdale fans in your comments?

That was amazing. Camila Mendes, a goddess among us, reposted my video and all of the fans came in to support, which was amazing.

Who is your dream scene partner for one of these?

I mean, there are so many. The ones I've had have already surpassed my dreams. Like, Reese Witherspoon, of course. But who would I play? Because I'd want to play Reese.

Have you watched anything in quarantine that has inspired you?

I hadn't seen Showgirls. I was shocked. I couldn't believe what I was seeing. I rewatched — this may be a spoiler for a scene coming up — My Best Friend's Wedding, which is amazing. I just heard Passport to Paris is on Hulu, so I will be watching that.