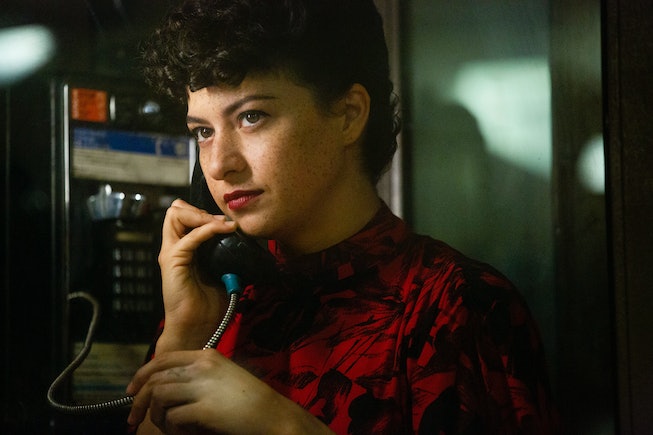 It's been a long, winding road on the way to Search Party's third season, but it's finally hitting the public eye at the end of this month. As I've detailed before, the show aired its phenomenal first two seasons on its original home of TBS back in 2016 and 2017 before being renewed for a third season in 2018. Unfortunately, the series found itself in development limbo shortly after its renewal and it was put on an indefinite hiatus while the show's creators tried to find it a new home. Now, almost three years after its climatic season two finale, the show is preparing for its long-awaited third season premiere at its new home of HBO Max, and today, the streaming service shared its first trailer.

Described in a press release as "a comedy thriller about a group of privileged, self-absorbed twenty-somethings whose search for a missing friend leads them down a dark and shocking path of no return," Search Party's third season "finds the gang swept up in the trial of the century after Dory (Alia Shawkat) and Drew (John Reynolds) are charged for the semi-accidental murder of a private investigator." Elsewhere, "Elliott (John Early) and Portia (Meredith Hagner) grapple with whether or not to testify as witnesses" while "the friends are pitted against each other and thrust into the national spotlight." As "Dory’s sanity begins to fracture, it becomes increasingly clear that the group may not have brunch together again for quite some time."

Having seen the upcoming season, I'm pleased to report that things don't slow down at all in this fresh batch of episodes. Picking up right where season two left off — with "the most fabulous public arrest ever," as one character so gleefully refers to it — the show wastes no time diving right back into the action. Dory is in jail, her ex-boyfriend Drew is desperately trying to avoid it, and her best friends (and the show's secret weapons) Elliot and Portia are taking off to the Hamptons to lay low while everything gets situated. The new season is a nonstop burst of entertaining twists and turns, continuing the show's perfect blend of millennial-minded humor and gut-wrenching suspense. Add in some great new guest actors, like comedian and Las Culturistas podcast host Matt Rogers, and it's safe to declare Search Party season three as one for the books and yet another win for the newly-launched HBO Max streaming service.

(I, for one, can't wait for the already-confirmed fourth season.)

Check out the trailer below. Search Party season 3 debuts in its entirety on HBO Max on June 25th.