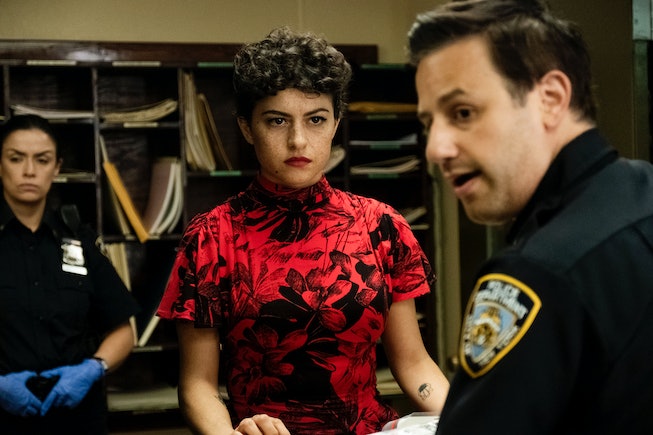 Photograph by Courtesy of WarnerMedia

HBO Max has finally launched, and with it came tons of content. As expected, the streaming service landed with all its namesake’s token series — your Sopranos and Veeps, if you will — as well as several new original series and movies, like the excellent ballroom competition Legendary and the heartbreaking #MeToo documentary On the Record, which closely examines the sexual assault allegations against Russell Simmons (and was infamously abandoned by Oprah Winfrey — and thus, Apple TV+ — just days before it premiered at Sundance.)

But even with these exciting offerings, I was most interested in the non-HBO titles that arrived with the streamer’s debut. In addition to the aforementioned, HBO Max’s massive library of content includes the entire Studio Ghibli collection, anime from Crunchyroll, plus film selections from both Turner Classic Movies and the Criterion Collection. With so much content to mine, NYLON decided to compile a list of ten non-HBO films and TV shows that you should immediately check out. Why not? It’s almost the weekend anyway!

Not everyone is down with adult animation, but for those interested in dipping a toe into the pond, I recommend The Boondocks, Aaron McGruder’s Adult Swim television adaptation of his seminal comic strip. Based on a nouveau riche Black family living in an elite all-white neighborhood, the series takes a politically-charged, satirical take on being Black in America by focusing on the experiences of an eclectic cast of characters — including young radical Huey and wannabe gangster Riley (both voiced by Regina King) and an Uncle Tom-type named Uncle Ruckus. I’d recommend starting with “The Itis,” a hilarious installment about a new soul-food restaurant whose delicious cuisine (spotlighted by signature dish “The Luther,” a full-pound bacon cheeseburger that uses two Krispy Kreme glazed donuts as buns) has an adverse effect on the unsuspecting white population. With beds instead of tables — you know, so you can just fall asleep for a quick nap after your meal — the restaurant’s opening naturally leads to chaos.

The Fresh Prince of Bel-Air, Seasons 1-6

Will Smith is an A-List movie star now, but never forget that The Fresh Prince of Bel-Air was the two-time Oscar nominee’s first real role after popping up on the scene as your dad’s favorite rapper. The early ‘90s sitcom stars Smith as, well...Will Smith. As summed up in its scarily catchy theme song, Fresh Prince follows Smith as he leaves his Philadelphia hometown to go live with his wealthy uncle and aunt in Los Angeles’ posh Bel Air neighborhood. The comedy gleans many of its laughs from the way the rough-and-tumble Will both sticks out like a sore thumb in this high-class environment while somehow still fitting right in, thanks to his cool confidence and self-assurance. And while Smith is the main draw, Fresh Prince functions just as well in ensemble settings, particularly when it comes to Will’s contentious friendship with his corny cousin Carlton and his mentor relationship with younger cousin Ashley.

Harry Potter and the Goblet of Fire

Most of HBO Max’s initial offerings were made public long before the service’s launch, but many fans were surprised to find the entire Harry Potter franchise sitting in the library the morning of. You really can’t go wrong with any of the eight films (not including the subpar Fantastic Beasts spinoff, which is also available), but fourth entry Goblet of Fire is the easy standout. Based around the Triwizard Tournament, which is being held at Hogwarts, the film feels different from the others mostly because it introduces new characters — fellow wizards from rival schools (including the painfully attractive Viktor Krum) — but also because it’s the first of the franchise to feel like high school, complete with a glitzy dance and all the petty teenage drama to go with it. Goblet of Fire is excellent, filled with spine-tingling action, heart-melting romance, and production design expansive enough to garner an Oscar nomination and secure a BAFTA win.

Given Saturday Night Live’s current status as our country’s reigning sketch-comedy series, you’d be forgiven for not giving MADtv its due. Canceled in 2009 after almost fifteen years on air, MADtv (a television spinoff of the popular humor magazine MAD) played like SNL-on-acid, a rebellious little sister with no filter, one that wasn’t afraid to push buttons. Sure, some of those buttons maybe shouldn’t have been pushed — the less we say about the racist Miss Swan character, the better — but, all in all, the show has withstood the test of time. While it’s been off air for over a decade, its legacy lives on through its talented cast, many of whom have gone on to bigger things, like The Marvelous Mrs. Maisel’s Alex Borstein, The Mindy Project’s Ike Barinholtz, and none other than Key & Peele’s Keegan-Michael Key and Jordan Peele.

As quarantine continues to roll on, there’s never been a better time to pour yourself into a new teen drama like The O.C., which ran from 2003 to 2007 and paved the way for future successes like Gossip Girl and the 90210 reboot. With a talented cast of would-be famous stars (Mischa Barton, Adam Brody, and Rachel Bilson), the series focuses on several families (and their rebellious teens) living in the wealthy titular town of Orange County. At its center is Ryan Atwood, a smart teen whose troubled background inspires the wealthy Cohen family to adopt him, introducing him to a new world of glamorous excess in the process. Filled with melodrama, sex, and betrayal, the series is everything you’d want from this genre. But what stands out the most is its eclectic soundtrack, which featured songs from musicians like Imogen Heap and Death Cab for Cutie (the shy awkward Seth Cohen’s favorite band, naturally).

If you ask me, I’d say there are no bad films in Paul Thomas Anderson’s sprawling filmography, but I’ll always hold a special place in my heart for Punch-Drunk Love, the director’s 2002 romcom about an emotionally-stunted business-owner who becomes an unlikely victim of attempted extortion after calling a phone-sex hotline. Starring Adam Sandler as Barry Egan (a role many deem was his last truly great one before Uncut Gems), the film follows lonely Barry as he falls in love with one of his (seven) sisters’ coworkers only to have his life completely upended by greedy people asking for money he doesn’t have. Ridiculous and charming, Punch-Drunk Love is one of Anderson’s freest and silliest works, finding the filmmaker throwing a bunch of seemingly unrelated things at the wall — seven sisters who are bullies, a coupon scheme, a last-minute trip to Hawaii — in a way that still feels like a successful whole in the end.

2019 was a great year for horror films, but few were as adept at balancing humor with scares as brilliantly as Ready or Not. (Okay, maybe Us was, but Jordan Peele is in a league of his own.) Starring Samara Weaving in a breakout role as newlywed Grace, the film follows as she finds herself the unwitting target of a potentially fatal game of Hide-and-Seek as her filthy rich in-laws spend an entire night trying to murder her. A nonstop ride of edge-of-your-seat suspense, the film plays like a parable about the dangers of avarice and unnecessary wealth and features one of the most cathartic movie endings in recent memory. Throw in a terrific supporting performance from The OC’s Adam Brody as the odd duckling of his despicable family, and it’s no surprise it made $57 million on a $6 million budget.

In 2016, Search Party quietly premiered on TBS just in time for the Thanksgiving holiday. A pitch-black comedy about a girl named Dory’s obsession with the sudden disappearance of her former college classmate, the series proved to be a worthy binge. As Dory, Alia Shawkat was an engaging neo-noir lead, but it’s not hard to imagine Search Party crumbling under the weight of its genre trappings if not for its secondary identity as an uproarious satire about entitled millennials — particularly in the case of Dory’s friends, who are admirably played by comedian John Early and Meredith Hagner. The show’s second season was arguably better than its first, but when it came time to film a third, the comedy’s fate seemed up in the air. Thankfully, HBO Max stepped up to the plate, agreeing to produce a third and fourth season. Both are slated to premiere in the coming months, making now the perfect time to catch up on the first two.

HBO Max may have spent $425 million to acquire the exclusive rights to Friends, but there's no denying that the Studio Ghibli library is the streamer’s biggest get. Every film in the expansive catalogue is a gift, but Spirited Away was the entry I felt the most eager to revisit. Hayao Miyazaki’s 2002 fantasy is a seminal classic — a mind-bending fever-dream about Chihiro, a young girl whose cross-country move takes a supernatural turn when her family walks through a tunnel that takes them to a new world populated by non-human spirits. Almost immediately, her parents are turned into pigs, sending Chihiro (and later, “Sen”) on a journey that finds her traversing realms to save their souls. With spellbinding animation and a mesmerizing score, it’s a film like no other, telling a wholly imaginative story that feels like a fairytale wrapped in a nightmare.

Earlier this year, Parasite director Bong Joon-ho referred to subtitles as a “one-inch barrier” that, once overcome, would introduce viewers to “so many more amazing films.” Coincidentally, his chief competitor in the Foreign Film categories was Pedro Almodóvar, whose Pain and Glory was, like Parasite, the director’s best film to-date. The film reunited Almodóvar with frequent muse Antonio Banderas and effectively captured the electricity that had been on display since they first started working together in the early ‘80s. One of the pair’s earliest team-ups, Tie Me Up! Tie Me Down!, also happens to be HBO Max’s sole Almodóvar entry, and though it’s an interesting choice, it is nevertheless a welcomed one. A sexually-explicit dark romcom, the film follows Banderas as a recently-released mental patient who kidnaps a former pornstar, convinced that he can make her love him back if only she could spend some quality time with him. Twisted and demented, it’s peak Almodóvar — no one could make this but him.

NEXT UP
Culture
Succession Season 4 Trailer Explodes With Family Drama
Culture
The Biggest Revelations From The Price Of Glee Docuseries
Entertainment
See a First Look At Marisa Abela as Amy Winehouse In "Back to Black" Biopic
Culture
6 Shows To Binge Once You've Finished 'The White Lotus'
Style + Culture, delivered straight to your inbox.