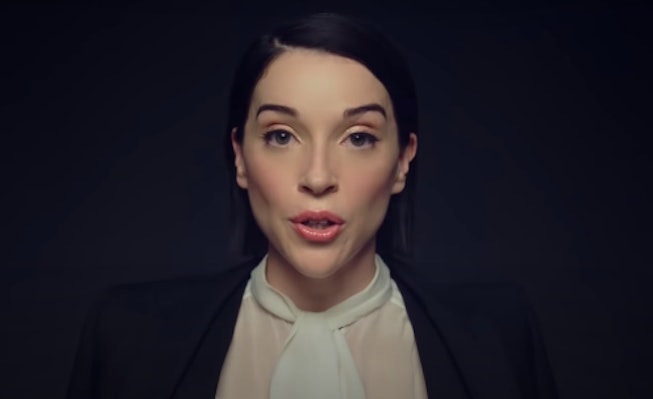 It’s been less than a week since St. Vincent dropped her sixth album, the brilliant Daddy’s Home (which memorably came with its own newspaper), but already the singer-songwriter is teasing up her next project: The Nowhere Inn, a mockumentary starring herself and close friend Carrie Brownstein as versions of themselves, trying to make a documentary about the musician’s life and work. Directed by frequent Portlandia collaborator Bill Benz, in his feature film debut, and written by the starring pair, The Nowhere Inn just received its first trailer.

“It was supposed to be a music documentary — concert footage, interviews, you know. I wanted people to know who I really am,” Clark teases at the beginning of the trailer, looking directly into the camera as if she were actually being interviewed as a talking head. “One of the reasons I wanted to make a documentary in the first place is because I would finally be in control of the narrative.”

But, as she continues, “All I can say is that, somewhere along the way, things went terribly wrong.”

“From real-life friends Annie Clark and Carrie Brownstein comes the metafictional account of two creative forces banding together to make a documentary about St. Vincent’s music, touring life, and on-stage persona,” reads a press release about the upcoming film. “But they quickly discover unpredictable forces lurking within subject and filmmaker that threaten to derail the friendship, the project, and the duo’s creative lives.”

Described as “a densely woven, laugh-out-loud funny, and increasingly fractured commentary on reality, identity, and authenticity,” the film is expected to dive into the separation between Annie Clark’s real-life as Annie Clark and her on-stage act as St. Vincent — and as the trailer hints, this exploration may prove complicated for Clark and Brownstein as they fight for their respective visions. It’s no surprise The Nowhere Inn is also described as “a story of two close friends who attempt to wrestle the truth out of a complex subject before the hall of mirrors that is their artistic lives devours them completely.” Dakota Johnson also appears as herself.

It’s been a year and a half since the film first premiered in January 2020 at last year’s Sundance Film Festival (the only 2020 film festival to run accordingly to plan before the COVID-19 pandemic forced every other one to adjust their programming). Following that premiere, the mockumentary, which has also been labeled a psychological thriller, received heaps of praise from critics who described it as “amusing,” “jolly,” and “a rather fascinating character study of sorts.”

Check out the new trailer below. The Nowhere Inn opens in theaters and VOD on September 17.