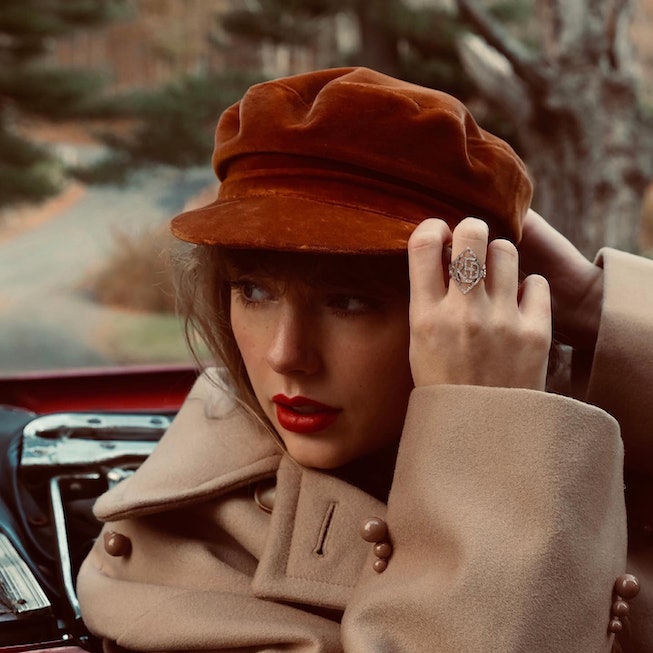 It was supposed to be the best night of Taylor Swift’s life. Instead, she was curled up in the backseat of what I imagine was one of those oversized Mercedes Sprinter vans that the rich and famous use to get around big cities surreptitiously, waiting out LA traffic next to a garment bag containing an unused afterparty look. Few sounds likely cracked the pall of silence: vibration notifications sent by well-meaning friends, the pitter-pat of teardrops falling on an otherwise untouched tray of drive-through fries, and perhaps an escaped sob or two. It was Grammy night 2014, and Swift had just lost Album of The Year for her fourth studio album, Red, to Daft Punk’s Random Access Memories.

It was the moment Taylor Swift realized that she had a very important choice to make.

“Everybody in music has their own niche specialty-thing that they do that sets them apart from everybody else,” Swift opined in Lana Wilson’s 2020 Netflix documentary Miss Americana. “My storytelling is what it is for me.” Like Wolverine’s claws, Taylor Swift’s razor-sharp pen is her hidden superpower, the X-factor that makes her the best there is at what she does. But unlike Wolverine’s claws, keeping it sharp requires constant maintenance. It requires feedback and criticism from an engaged audience.

But Grammy voters are not typically a great audience. The record business is notorious for churn, the way it chews people up and spits them out. Still, Swift grew up wanting desperately to be part of the same industry that put Britney Spears under a conservatorship and touted it as a new “hybrid business model.” Survival was the prize that Swift was playing for, the stone she decided to sharpen her blade against. That’s what winning the Album of the Year Grammy meant to her.

Up for the Academy’s consideration that 2014 night was her latest record, a swirling Homerian epic about the weightlessness of young love and the dark forces that conspire to send it hurtling back to earth. She called it Red, perhaps in deference to Joni Mitchell’s Blue. In the face of on-going speculation about whether Swift’s true allegiance lay with country or pop, Red offered a lot of generous, open-hearted answers.

On Red, Swift locked horns with Max Martin, the credited architect of the previous twenty years of radio pop, and emerged from the experience with a finished product that was no less personal, intimate, or writerly than any of her other works. Alongside strong contributions from Swift’s Nashville regulars were collaborations with UK guitar-slingers Gary Lightbody and Ed Sheeran, positioning her as part of a tradition that extended beyond the boundaries of country music and maybe even the borders of America itself.

Red had a millennial’s laissez-faire attitude towards genre, an emo kid’s militant commitment to sincerity, and a ‘70s singer/songwriter’s eye for detail. Daft Punk’s Random Access Memories is a shamelessly sentimental ode to the way records used to be made. Red was the future. That was the problem.

Swift followed up Red with 1989, an album that turned out to be very aptly named in its it callback to a very 1989-era set of ideas about what pop music is. While Red overflowed with ideas and spawned legendary cuts that came to be more beloved than any of its official singles, 1989 was tight, focused, and front-loaded with hits. It was a CD that you bought just for the singles from an artist that used to pack albums with enough Easter eggs and story arcs to make Pink Floyd jealous.

1989 was a record that understood pop radio has a very narrow bandwidth, both literally and figuratively, and was determined to trim whatever excesses were necessary to squeeze into it. In recording studio parlance, this is called “compression,” and it can be very controversial. In order to compress well, an idea has to be very simple — mainstream broadcast media platforms like radio don’t handle complexity well. There’s always a danger you’ll lose something precious, though, if you try too hard to fit in.

1989 was also perfectly suited to FM radio’s narrow bandwidth, but showed up just as kids started doing most of their listening on broadband internet connections. Swift had been among the most active and skilled users of social media in the entire music business for basically as long as she’d been famous, but she focused on radio as a platform because the internet had always been fringe. In 2016, that was no longer true. News anchors started reporting on tweets. Extremist ideology spawned from obscure message boards, tearing families apart and driving national public policy. More than a cultural reset, it was a cultural inversion. Online was offline. The fringe was the center.

In music, the big shift became obvious when streaming platforms like Spotify started impacting the Billboard charts, and the data painted a drastically different picture of what listeners were into than what radio had been pushing. Radio’s favoring of slick, simplistic production that compresses well and upbeat melodies that feel like what marketing professionals refer to as a “call to action” are the demands of the platform, not necessarily the audience.

As streaming started to supplant radio as the dominant platform for popular music worldwide, the sound of popular music started to change. Trap music, long dismissed by bigoted radio programmers as too dark and niche to succeed in the mainstream, seemed to become the default sound of the Hot 100 overnight. Introspective lyricists and melancholy melodies flourished both creatively and commercially. People used to joke about never being able to make out any of the words in Ariana Grande’s music, but the song that finally allowed her to ascend to main pop girl status was “Thank U Next,” a reflective and diaristic work that lived and died on the strength of the lyric. Even breezy electropop started getting wordier, with songs like “New Rules” and “Sweet But Psycho” succeeding on the strength of their concepts as much as their hooks.

Even more strongly affected by the growing influence of the internet, though, was the album format itself. On streaming platforms, albums had to start competing with playlists — which can encapsulate the eccentricities and idiosyncrasies of a listener’s personal tastes much better than a collection of songs assembled primarily to suit the limitations of formats like CDs and vinyl records.

In order to adapt, albums got longer and more concerned with maintaining a vibe than with crafting bright, obvious radio singles. Lyrics got deeper and denser in order to better reward repeat listens — even if that just meant burying them under layers of processing, regional slang, and exuberant ad-libs. Thematically, songs could be sadder and more complicated, owing to the waning influence of radio’s myopic focus on uptempo pop hits that sound like they could be used to sell things. In other words, albums in the post-streaming era started to look more and more like Red.

Swift followed up 1989 with two more albums that were heavily focused on launching big radio singles. It goes without saying that Taylor Swift is an industry unto herself, and it would be both disingenuous and inaccurate to describe any of her albums as anything less than a smash hit success. Culturally, though, these albums didn’t really make the broader cultural impact that 1989 did.

Still focused on surviving for as long as possible by winning approval from the establishment, Swift may not have noticed the extent to which the earth had shifted beneath her feet. Red still probably felt like a book that had been closed. Grammy night 2014 was still the end of the story. “This is probably one of my last opportunities as an artist to grasp onto [this] type of success,” Swift lamented during the closing minutes of Miss Americana. “So, I don’t know. As I’m reaching 30, I’m like, I want to work really hard while society is still tolerating me being successful.”

That footage dates back to 2019, when Swift was getting ready to promote Lover. That album was loaded with loud, cheerful pop singles displayed at maximum brightness that ended up being outshined by moodier album cuts like “The Archer” and the folksy title track. Frustrated with the constraints of the type of career her establishment backers had always envisioned for her, she staged a daring escape.

Swift advocated publicly for feminist causes, something her mentors had always insisted would divide her audience in half. She openly waged legal warfare against a radio DJ who’d sexually assaulted her, fully aware that she risked alienating the gatekeepers in charge of the radio playlists that had always been the lifeblood of her career. She turned away conclusively from Scott Borchetta, the man who’d shepherded her into the industry in the first place, choosing to chart her own path forward even if it meant turning powerful friends into enemies.

Back in 2014, the night of the Grammy telecast, Taylor Swift faced a choice between the pain of remaining tight in a bud and accepting the risks inherent in trying to blossom. She chose pain. Those three albums she made afterwards, 1989, Reputation, and Lover, are resplendent with stories about someone who is afraid that no one else who sees what she has to endure will ever decide that she is worth the risk of having to endure any part of it themselves. Stories about someone who is afraid that anyone who falls for the tight bud will be repulsed by the flower living underneath it.

After her last big stab at 1989-era pop success, though, Swift finally allowed herself to bloom. She returned to the blueprint for post-Internet pop albums that she established on Red and improved upon it, bringing nearly a decade’s worth of daily practice and lived experience to bear on Folklore, perhaps her best album to date. It tells interconnected stories about complicated people in complicated situations. The closest thing to a radio single on it is “Betty,” a song written and sung from a teenage boy’s perspective that peppers the type of show-stopping pop-country chorus Swift made her name on with playful bursts of PG-13 profanity.

By leaving radio and the entrenched cultural conservatism of the industry establishment behind, Swift evolved her craft to another level entirely, and listeners noticed. Folklore broke streaming records left and right, breaking the cycle and discovering the answer to the question of where pop music needs to go in order to thrive in the post-streaming paradigm. After spending five years in 1989, Taylor Swift was the future again.

There was a time where Red might have looked like a dead end, and 1989 like a necessary course correction. Maybe the reason Taylor herself seems so excited about the upcoming release of her “Taylor’s Version” re-recording of Red is that the world has finally caught up with it. When she wants feedback, Swift no longer has any need of the voting membership of The Recording Academy. She has one of the most highly engaged and organized fanbases anywhere in the world. Listeners who celebrate depth and nuance just as much as radio programmers bemoan those things. Listeners who don’t need a huge branded marketing campaign with hit singles and ads slapped on the side of UPS trucks to drive her streaming numbers into the stratosphere.

Red is the album where Taylor Swift became the sort of artist we will probably always think of her as from now on. It’s one of the first massively popular artifacts of post-Internet culture. Now it has the audience it has always deserved, and this new version is a perfect opportunity to celebrate that.