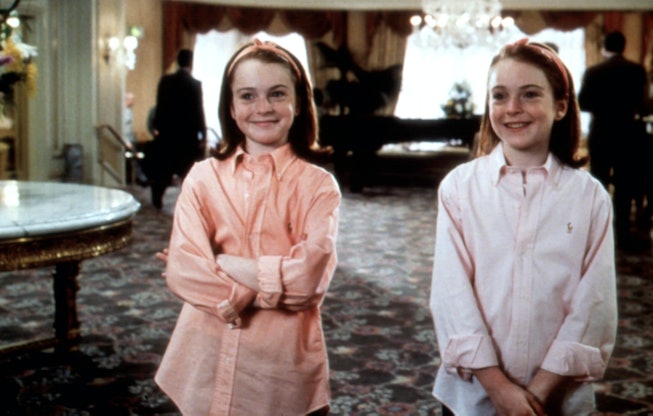 Over the last few years, Lindsay Lohan has been a whole host of things: a "beach club" owner, an attempted kidnapper of refugee children, and a returning pop star. But before she was any of those, she was Hallie Parker and Annie James, the long-lost twin sisters who randomly stumbled upon each other while attending summer camp in the beloved comedy The Parent Trap. After entertaining families for the past couple decades, the main cast and crew of the film reunited (minus the late Natasha Richardson) for a reunion special.

Moderated by Katie Couric, The Parent Trap reunion special arrived in full this morning, exactly 22 years after the film first premiered in American movie theaters on July 20, 1998. With appearances from everyone in the cast (Lohan included), as well as director Nancy Meyers and writer-producer Charles Shyer, the reunion also doubled as a fundraiser for World Central Kitchen. Across fourteen minutes, The Parent Trap team recalled their favorite scenes (Dennis Quaid loved falling in the pool, even if he had to do so multiple times; Lisa Ann Walter liked seeing Simon Kunz in a Speedo), recite a few memorable lines (Quaid and Lohan re-enact the post-camp car scene), and reminisce on their experience filming.

Quaid spoke about his first screen-test with a then-11-year-old Lohan. "That's one of the most talented people I've ever met, period. Forget that she's 11 years old," he recalled. Shyer also couldn't help but sing Lohan's praises, recalling how he and Meyers auditioned many kids actors before landing on Lohan. "Within two or three minutes [of Lohan's screen-test], we both knew she had the part," he said. Lohan, on the other hand, recalled feeling worried: "I was so young and it was just so fresh to me. It was my first movie audition, my first screen-test, my first time in front of people like Nancy and Charles on a soundstage."

Elaine Hendrix, meanwhile, reflected on the evolving perception of her character Meredith Blake, whose villain-status is now is now being re-evaluated. "There's the whole generation that thinks Meredith is hashtag-goals," Hendrix said. "There was this online campaign, #JusticeForMeredithBlake, and I was like, right on! Yes! Meredith is getting her due!" And for those wondering, yes, Lindsay Lohan remembers the handshake (but she might mess up a few parts).