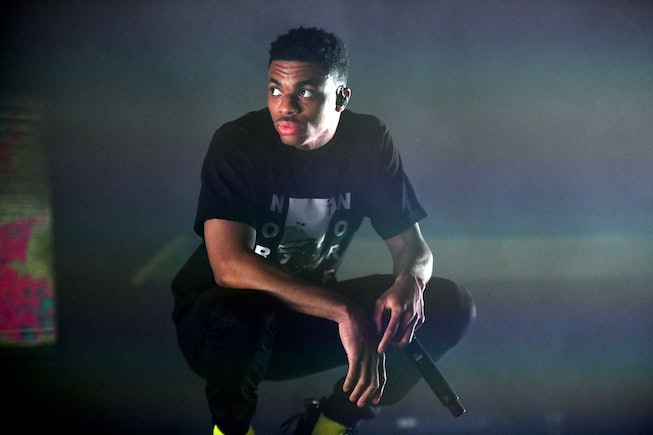 Earlier this year, Vince Staples released yet another typically stellar album, Ramona Park Broke My Heart, but it’s his gradual embrace of acting that has been really solidfying the young artist as an all-around star. Already, Staples has lent his talent to buzzy films like Dope and Gully as well as to animated TV shows like Lazor Wulf and American Dad! And now, he’s ready for more. Just two months ago, Staples attached himself to two new gigs — the Jack Harlow-starring White Men Can’t Jump reboot and Showtime’s television adaptation of The Wood — and yesterday, The Hollywood Reporter revealed that the rapper is also working on a new show for Netflix.

Fittingly titled The Vince Staples Show, the upcoming scripted comedy series will be loosely inspired by the rapper’s own life. This, of course, means it will take place in Staples’ hometown of Long Beach, California — which is perhaps why House Party and White Men Can’t Jump director Calmatic, a born-and-bred Angeleno, was tapped to helm the first two episodes. Though little else is currently known about the project, the series is being executive produced by Black-ish creator Kenya Barris, so we can expect some of his distinct comedic flavor to influence the new show’s tone.

Either way, Vince seems eager to dive into this latest endeavor. “I am excited to partner with Netflix and Kenya Barris on The Vince Staples Show,” the rapper shared in a recent statement. “This has been something I have been developing for some time and I am happy it’s coming to fruition.”

Tracy Pakosta, Netflix’s Head of Comedy, echoed her new collaborator’s excitement, saying, “It’s our mission to work with the best artists in the world. Vince has already established himself as one of the most talented young musicians today and we’re really excited about his sensibility — and sense of humor — will translate into a unique comedy series.”

For now, there is no word on when we can expect The Vince Staples Show. (Calmatic, the only director currently attached to the project, is currently hard at work filming White Men Can’t Jump, which Staples also appears in, after all.) But if you’re just itching to see Vince flex some of his clear acting chops, you can always open HBO Max and watch the “Lowkey Movin’ On” episode of Insecure.

NEXT UP
Culture
Netflix Is Seriously Cracking Down On Sharing Passwords
Culture
6 Shows To Binge Once You've Finished 'The White Lotus'
Entertainment
Harry Styles' "As It Was" Grammy Performance Featured A Silver Tinsel Onesie
Entertainment
Beyoncé Is Now The Most Awarded Artist In Grammy History
Style + Culture, delivered straight to your inbox.