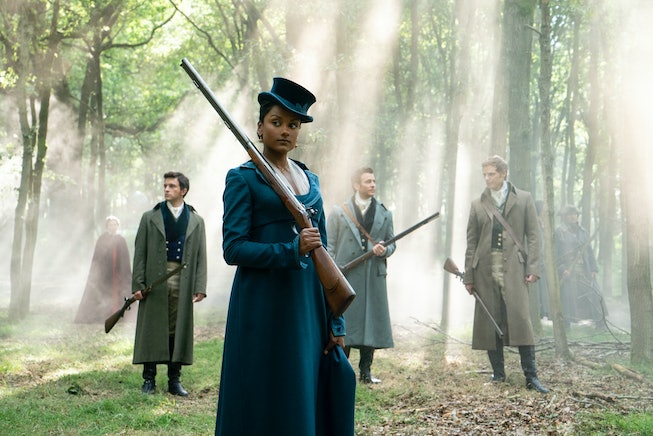 Right now, Netflix is riding high off our current obsession with scam artists, as The Tinder Swindler tops the streaming service’s global film charts and Shonda Rhimes’ Anna Delvey miniseries Inventing Anna does the same for television. It’s been a strong start to 2022 at La Casa de Ted Sarandos, and from the looks of it, the streamer has no intentions of slowing down. With just one glance at the list for new content coming in March, it’s clear Netflix has plenty for everyone to get excited about.

The biggest, most talked-about release of the month will definitely be Shonda Rhimes’ other Netlix hit, Bridgerton, which returns for its long-awaited, pandemic-delayed second season on March 25th. Picking up where things left off almost a year and a half ago, season two will divert its focus away from Daphne Bridgerton (who is now happily married to Simon Hastings, who won’t appear in these new episodes) and onto her older, overprotective brother Anthony. Though Anthony spent the majority of season one running away from love, season two finds the eldest Bridgerton son taking some responsibility for his family by taking his courting duties seriously. As has been reported, Anthony’s main love interest will be Kate Sharma, played by Sex Education’s Simone Ashley.

Equally exciting is Pieces of Her, a new thriller series starring Academy Award nominee Toni Collete as a mother harboring more than a few secrets. Based on the New York Times bestselling novel of the same name, the series, which hails from the producers of Big Little Lies and The Undoing, kicks off when Laura (Collette) saves her daughter Andy (The Neon Demon’s Bella Heathcote) from a seemingly random violent threat. Though the circumstances surrounding the incident are initially mysterious, Andy’s surprise at her mother’s quick-acting reflex skills leads the child down a rabbit hole to uncover the truth about who her mother might really be behind closed doors.

Then, there’s the premiere of Human Resources, the equally raunchy animated spinoff of Netflix’s Emmy-winning puberty tale Big Mouth. Featuring some familiar faces (Connie the Hormone Monstress, Maury the Hormone Monster, Depression Kitty, Shame Wizard) and more than a few new ones (Rosie Perez’s Petra the Ambition Gremlin and Henry Winkler’s Keith From Grief, especially), Human Resources capitalizes on the familiar trademark humor of its predecessor while also changing the original’s central setting and chief focus, allowing it to become something totally of its own. Still utterly hilarious, it’s a great addition to the wider Big Mouth universe.

On the original movie front, Netflix is blessing us with a new leading vehicle for Gossip Girl’s Leighton Meester with The Weekend Away. While on a weekend getaway to Croatia, Leighton’s character wakes up one morning to find that her best friend has inexplicably gone missing. She soon finds out that that isn’t all — her friend has actually been murdered. Desperate to uncover the truth and, perhaps more importantly, prove her own innocence (The Flight Attendant, anyone?), she is forced to untangle a web full of lies and, ultimately, uncovers some painful secrets in the process.

Of course, sometimes you just want to curl up with an old classic (the familiar is always comfortable) — and when in those moods, Netflix has you covered too. March will see the arrival of Contagion, Steven Soderbergh’s eerily prescient thriller about a pandemic; Shrek 2, the rare sequel to live up to its breakout predecessor; Sorry to Bother You, the bonkers LaKeith Stanfield-led film that established Boots Riley as a writer/director to watch; and Where the Wild Things Are, which is still an utterly charming delight for adults and kids alike.

Check out everything coming to Netflix in March 2022 below.

NEXT UP
Culture
Netflix Is Seriously Cracking Down On Sharing Passwords
Culture
6 Shows To Binge Once You've Finished 'The White Lotus'
fashion
How ‘Spice World’'s Costume Designer Nailed The ‘Scooby-Doo on Acid’ Look
Culture
Loewe’s Howl's Moving Castle Collection Is An Anime Dream
Style + Culture, delivered straight to your inbox.