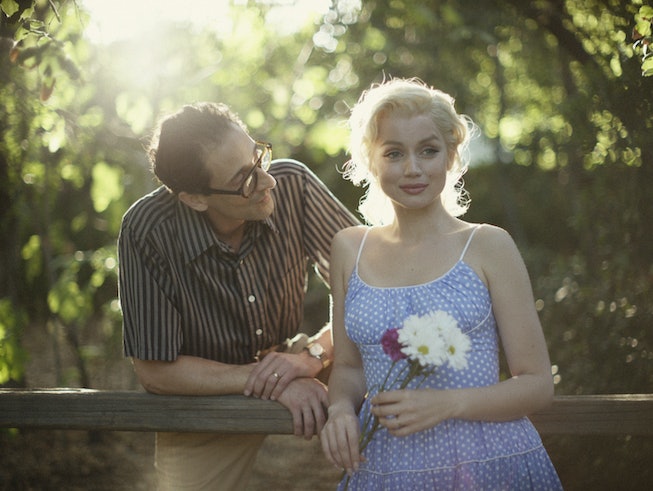 As August crawls towards its end, we are faced with a new reality: the final days of summer. Yes, we’ve spent the past few months soaking up the sun and lazing about, taking advantage of summer Fridays and much-needed vacations. But there comes a time when we must throw on our jackets and glide into the cooler months. Labor Day is right around the corner. Time to face the music.

But who’s to say that can’t also mean more time to watch TV? Sure, we may have more to do. But we’ll also spend more time indoors, meaning more time spent directly in front of the television. The fall TV season is about to start (Abbott Elementary is back so soon), as are film festivals (with all the awards-ready movies gearing up for battle), which means we’re about to be bombarded with a slew of new titles. And of course, Netflix is right there in front, ready to keep you sated.

The streamer’s most anticipated September title is, of course, Blonde, Andrew Dominik’s NC-17 adaptation of Joyce Carol Oates’ 2000 novel about the enigmatic actress Marilyn Monroe. Years after being announced, the controversial biopic will finally release at the end of next month, just weeks after receiving its world premiere at the Venice Film Festival. While little is known about the film — other than the fact that it might be the “baby daughter” of Citizen Kane and Raging Bull, according to Dominik, and an “utterly feminist interpretation,” according to Carol Oates — the trailer is more than enough to at least pique our collective interest. With Ana de Armas in the lead and a prime awards season release date on the books, it’s safe to say that Netflix is betting big.

Animation not your thing? Strap in for Do Revenge, which finally answers the biggest question posed by The White Lotus: What could possibly be scarier than teenage girls? Starring Stranger Things’ Maya Hawke and Riverdale’s Camila Mendes, Do Revenge is a “subverted Hitchcock-ian dark comedy” about two girls from opposite worlds who “team up to go after each other’s tormentors.”

Or maybe you don’t want to focus at all, in which case, one, I totally get you, and two, may I introduce you to Dated & Related? If you want to veg out in front of some mindless reality TV, why not sink into this dating show where single siblings take a joint trip to a luxury estate in the South of France in the hopes of helping each other find soulmates?

Then, there are the non-originals everyone will be talking about. Morbius will hit the streamer sometime next month, so try not to laugh at the inevitable memes. Instead, distract yourself with superior fare, like Barry Jenkins’ If Beale Street Could Talk, Keira Knightley’s sapphic Colette, Kristen Stewart in Snow White & The Huntsman, plus two movies with This Is in the title (yes, both This Is 40 and This Is The End will be joining the streaming service next month).

Look below to find a full list of releases coming to Netflix this September.