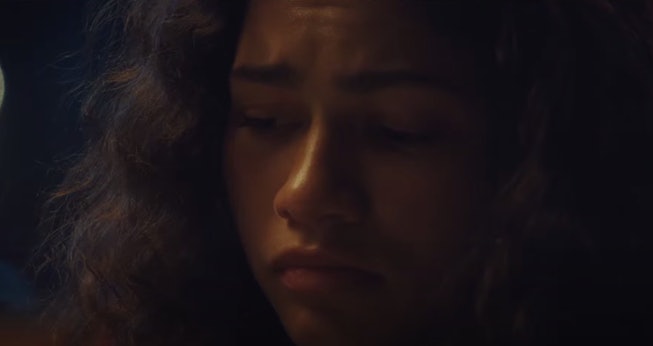 It's been almost a year and a half since we last had a new episode of Euphoria on our screens. But luckily, that will soon change. Though the show's highly-anticipated second season is still a while away, series creator Sam Levinson is treating fans to two special episodes that are meant to bridge the gap between season one and season two. Word on what to expect from the second episode is currently still under wraps, but the first episode, which will follow Rue "in the aftermath of being left by Jules at the train station and relapsing," has just received its first trailer. Naturally, we're shaking.

Titled "Trouble Don't Last Always," the first of Euphoria's two bridge episodes takes place as Rue "celebrates Christmas" — though the character's relapse in the season one finale will probably prevent her from truly celebrating such a deliberately chipper holiday. Written and directed by Levinson, the episode is rumored to be a two-hander between Zendaya's Rue and Colman Domingo's Ali, Rue's no-nonsense sponsor. After spending the majority of season one doing everything in his power to make sure that Rue took her recovery as seriously as she needed to (if you recall, Rue was consistently collecting chips at Narcotics Anonymous meetings despite actively still using drugs), Ali returns to help Rue yet again — though there's a high probability that Rue is now in an even worse mental state than she had been before.

According to the recently-released trailer, though, this Euphoria "Christmas special" won't really have any sense of "Christmas cheer." In the 50-second clip, Rue sits alone in a diner, looking somewhat forlorn and disheveled as she absentmindedly stares at nothing in particular. There is a brief flashback to Rue's planned escape with Jules at the end of last season — the incident we suspect drove Rue to an eventual relapse — as well as to her ultimate decision to pull out. But can Ali offer some reprieve? Rue looks positively distraught in that diner, at least until Ali shows up to her booth to sit across from her.

"Rue," he intones in his buttery-soft voice. "Why'd you call me?"

I guess we'll have to wait until December 6th at 9:00pm to find out.

Check out the trailer below. This Euphoria special will premiere on HBO and HBO Max.