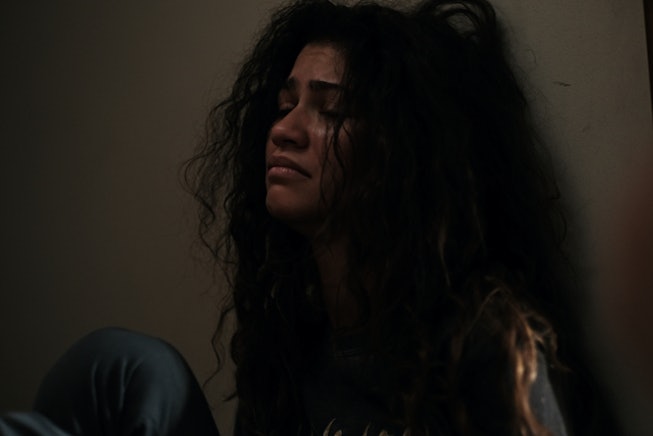 In the fifth episode of Euphoria, Zendaya gives a transcendent performance as central character Rue. Desperate to find the drugs she had stashed in a suitcase and hid from everyone, the high school student violently storms around the house, breaking everything in sight and physically attacking her concerned mother (Nika King) and little sister (Storm Reid). It’s an utterly terrifying sequence of events, and one that has understandably complicated the character of Rue, making it infinitely more difficult to root for her. Now, not only is she an addict, but she’s also an unhinged assailant, responsible for doing unspeakable things to the people who love and care about her most. But it’s also true that Rue is battling a severe disease of the mind and body — and because of that, Zendaya really hopes people don’t turn their back on her.

Following last night’s episode, the Spider-Man actress took to Instagram to speak about “Rue’s journey this season” and what she hopes “we hold onto and are left with in the end.” In a statement focused on the disturbing events of this episode, Zendaya talked about the importance of having flawed characters on TV and how she wants Rue’s story to help other people in real life.

“I think in this show, and this season more specifically, [Rue] hits rock bottom,” the statement begins. “It’s my hope for people watching that they still see her as a person worthy of their love. And worthy of their time, and that she has a redemptive quality still, and that we still see the good in her even if she can’t see it in herself.”

The Emmy winner went on to frame Rue’s harrowing addiction journey as a litmus test for having empathy for others. “If people can go with her through that, and get to the end, and still have hope for her future, and watch her make the changes and steps to heal and humanize her through her sobriety journey and her addiction, then maybe they can extend that to people in real life,” she said. “If you can love her, then you can love someone that is struggling with the same thing.”

In the end, Zendaya hopes that Rue (a character she “cares about deeply”) will still be loved, even in her darkest moments — even in her rock bottom, as she says. Noting that it’s “important to have characters that are flawed,” Zendaya concluded her powerful statement with, “Remember that we are not the worst mistake we’ve ever made. And that redemption is possible.”

In an interview with Entertainment Weekly, the actress also noted the emotional and physical toll that playing Rue sometimes takes on her. Of filming the intervention episode, she said, "It was a very tough day. I mean, I beat myself up. I still have some scars on my legs, and got quite a few bruises."

"It was so intense and scary to tackle, and obviously something that would be incredibly emotionally taxing, but also physically taxing," Zendaya added. "Also, I care about Rue and I hate when she's in pain. And I think this whole episode, there's so much pain and it's bubbling to the surface, and it's also crossed with her withdrawing, which is extremely physically painful."

Going deeper into her character’s disease of addiction, Zendaya said, “[Rue’s] in the midst of a degenerative disease and it's taking control of her life. And in many ways she feels out of control. She doesn't have the ability to control her emotions, her body. And like I said, she's in a lot of pain and I think we really wanted to see that viscerally and feel that pain and how much it inflicts upon other people who also have to love people who go through these things."