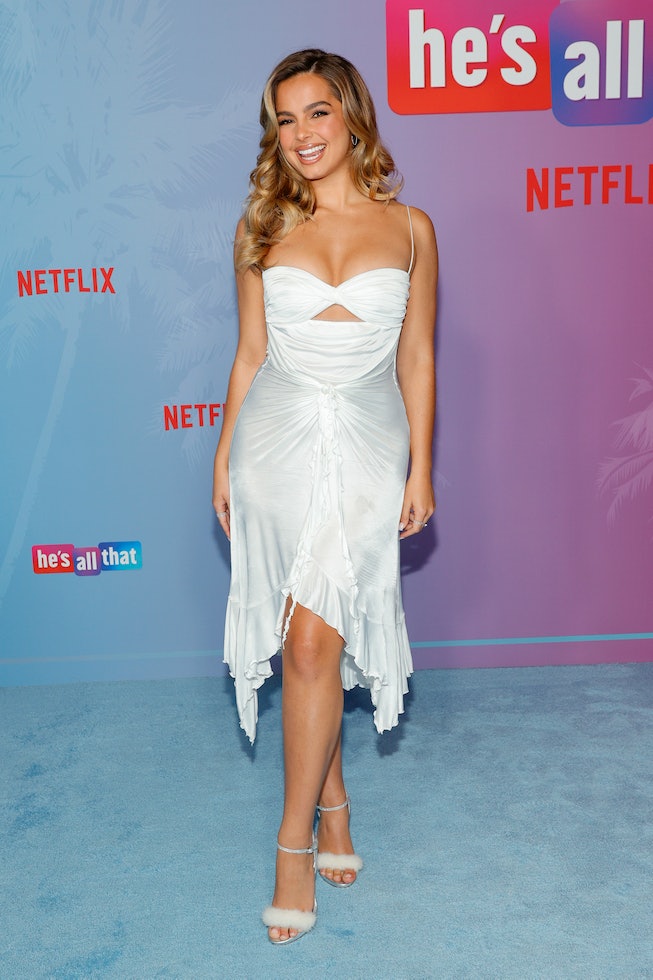 On Wednesday, Aug. 25, Addison Rae attended the premiere of her debut film He’s All That. The 20-year-old TikTok sensation-turned-pop singer (and now actress) is no stranger to the red carpet but her latest appearance is a big deal. She stars in the new movie as the lead role, alongside Tanner Buchanan, in the gender-swapped Netflix remake of the 1999 teen film.

Styled by image architect Law Roach, Rae exuded Hollywood sweetheart in an ethereal white dress from Versace’s Spring 2004 collection, which was first seen on the runway on supermodel Linda Evangelista. (If you want to do the math, Rae had just 3 years old when this dress made its first appearance in October 2003 during Milan Fashion Week.) Now, almost 18 years later, Roach paired Rae’s throwback look with heels adorned with feather detailing from Le Silla, making her appear even more angel-like.

“premiere nighttttttttt 🎬,” wrote Rae on her most recent Instagram post, posing cross-legged on a couch at Thompson Hollywood.

This isn’t the first time Roach dressed the influencer in vintage Versace. Back in July, Rae rocked a low-cut and colorful floral dress that showed a peek of her midriff, which was also from the same Spring 2004 collection. She wore the look to attend the UFC 264: Dustin Poirier vs Conor McGregor match in Las Vegas.

Aside from being one of the most followed and highest-earning TikTok stars, Rae is really outdoing herself this year. Not only is she promoting her first movie, but she’s already launched her very own beauty line Item Beauty, which specializes in clean and vegan makeup essentials, and dropped her first single “Obsessed.” With New York Fashion Week just around the corner in September, along with the 2021 MTV VMAs and Met Gala (that she is rumored to be attending), we can only imagine that the rest of Rae’s year is going to be stacked with some major fashion-worthy moments. Perhaps Roach has more vintage Versace for Rae is in the works? After all, everything happens in threes.