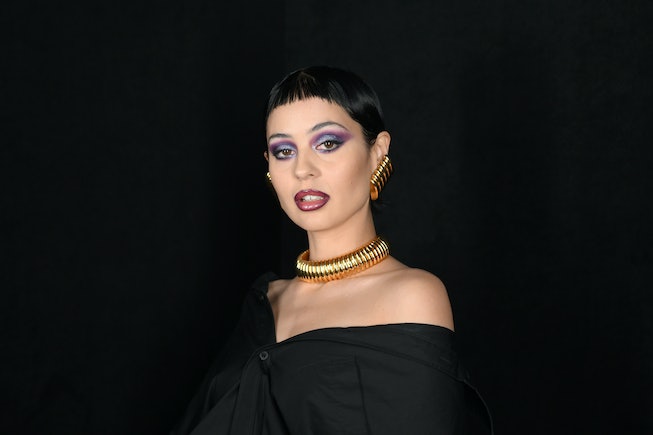 Euphoria may not be filming its next season just yet but Alexa Demie is keeping busy on the fashion front, landing her first-ever Balenciaga campaign for its Fall 2022 collection. The actress has been a close friend of the brand for some time now, sitting front row at runway shows and wearing Demna-designed pieces both on the red carpet and while off-duty.

Balenciaga’s Fall 2022 campaign, created by Berlin-based photographer Daniel Roché, continues with the French fashion house’s futuristic-inspired runway show of simulated weather. (As a refresher, models walked through an orchestrated snowstorm within a glass dome at Paris Faris Fashion Week.) The imagery takes on a similar theme, with Demie and the rest of the campaign’s models wearing outfits that seem not-so-suited for their surroundings — faux fur coats and layered looks in the middle of the desert; a more minimal ensemble in a city snowstorm; all-black and a stuffed trash bag (which goes for close to $2,000) on the beach.

Demie joins Kim Kardashian in the new campaign, making this the reality star-turned-business mogul’s second fashion job with Balenciaga since becoming the face of the French fashion house back in February. Kardashian is seen wearing a hybrid bodysuit dress in a bright blue color and yellow floral print, glove boots, sporty sunglasses, and the luxury brand’s signature bags.

With Fashion Month Spring 2023 kicking off very soon in September, we’ll likely see yet another celebrity-studded front row at Balenciaga’s upcoming show during Paris Fashion Week. Pending work schedules, Demie will probably be in attendance, as well as Kardashian (and maybe North West by her side, too?), along with a slew of other famous faces. See the rest of Balenciaga’s latest campaign starring models Big Matthew, Khadim Sock, and Kim Yeon-koung, below.

Photos by Daniel Rocheě
NEXT UP
Culture
The Cutest Couples At The 2023 Grammys
Fashion
Jenna Ortega Is The Face Of Adidas’ Newest Line
Fashion
Apple Martin Is A Chanel Girl Now
Fashion
The Wildest Front-Row Looks From Couture Week In Paris
Style + Culture, delivered straight to your inbox.