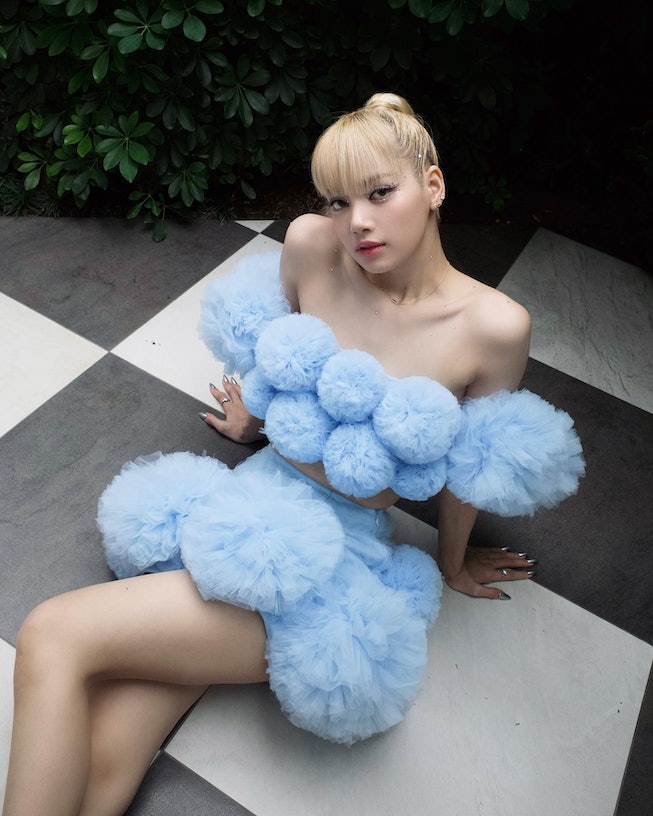 While the majority of Hollywood was prepping for the 2022 Oscars red carpet (and many, many after parties), Blackpink’s Lisa was celebrating her 25th birthday. The K-pop star took to Instagram to show off her special day’s outfit, which included a baby blue pom-pom dress by Lirika Motoshi. The New York designer is known for her many ‘fit pic-worthy pieces, including the viral, cottagecore-adjacent Strawberry Dress.

Lisa paired her ethereal look with simple accessories, like a necklace from Celine and rings by Bvlgari (two brands that she represents as an ambassador), and a pair of black heels with embellished wraparound ankle straps by Rene Caovilla.

To go with her sparkly outfit details, the singer went for an equally shimmering makeup look, featuring silver gems that she dotted on her eyes, chest, and hair, as well as a matching silver manicure.

“I’m so happy that this year I can spend my birthday with family and friends,” wrote Lisa on Instagram. “Thank you everyone for making another year of my birthday so special💗”

Ahead, check out the rest of our favorite celebrity looks from the past week, including Elle Fanning in Rodarte, Lizzo in Lapointe, and more.

Elle Fanning is busy promoting her new Hulu show The Girl From Plainville and made an appearance in New York City wearing a leopard-print dress from Rodarte paired with bright pink pumps by Roger Vivier.

Lizzo hosted a watch party in Los Angeles for her new show Lizzo’s Watch Out For The Big Grrls in a trippy, printed cutout dress custom-made by Lapointe.

At the 2022 Essence Black Women In Hollywood Awards, Storm Reid wore a yellow midi dress with cutouts and feather details from Lapointe, paired with white heels.

Olivia Rodrigo channeled the coquette aesthetic at the premiere of her new documentary driving home 2 u (A Sour Film). Her bow-adorned corset top and pink mini skirt by Fancì came with matching gloves, which she paired with Wolford knee-high socks and GCDS platform heels.

Kendall Jenner is giving us spring outfit inspiration while out in Los Angeles. She wore a cropped white tank with bright green pants and platform flip-flops.

For the screening of her new HBO Max film Moonshot, Lana Condor wore a neon yellow dress from Prabal Gurung.

Haim sisters Danielle and Alana wore matching custom gowns from Marni at the Vanity Fair and Bacardí Rum party celebrating Young Hollywood ahead of the 2022 Oscars.

At the 2022 iHeartRadio Music Awards, Willow Smith wore a long black jacket from Ambush with a leather micro-mini skirt and thigh-high black boots.

Janelle Monáe was one of the many celebrities attending Ralph Lauren’s Fall 2022 show in New York City, wearing a full look from the American heritage brand.