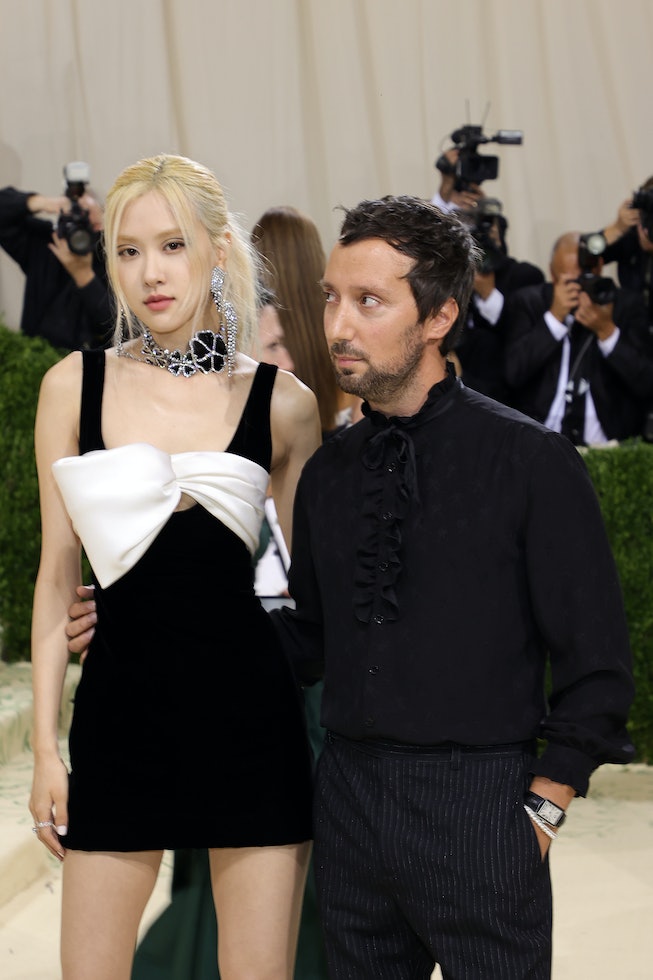 Blackpink’s Rosé arrived at the 2021 Met Gala red carpet on Monday night, making her debut for the major fashion event. The K-pop star was dressed in Saint Laurent by Anthony Vacarello, naturally, as she joined the French fashion house as a brand ambassador in 2020.

Rosé’s look is a black mini dress with a large white bow detail, which she paired with black pumps, a diamond choker necklace, and statement chandelier earrings.

Rumors swirled that the Blackpink star would be making an appearance at the Met Gala over the weekend. She was spotted earlier in New York City leaving what fans alleged was a fitting at Saint Laurent.

Rosé’s presence in the luxury fashion space has been on the rise. Not only has she partnered with Saint Laurent, but she landed an ambassadorship for Tiffany & Co., as well. In April, the “On The Ground” singer starred in the jewelry brand’s campaign for its HardWear collection.

The women of Blackpink have become a go-to favorite for a slew of fashion companies. Most recently, Jennie starred in another Calvin Klein campaign. (She’s also the face of Chanel.) Dior tapped Jisoo as its latest brand ambassador, while Lisa has been working with Celine since September of last year.

NEXT UP
Fashion
Olivia Rodrigo Wore A Sheer Slip Dress To The 2023 Grammys
Culture
The Cutest Couples At The 2023 Grammys
fashion
All Of The Sexy, Sparkly Outfits From The 2023 Grammys Afterparty
Beauty
Charli D’Amelio and Landon Barker Wore His & Hers Goth Manis To The Grammys
Style + Culture, delivered straight to your inbox.