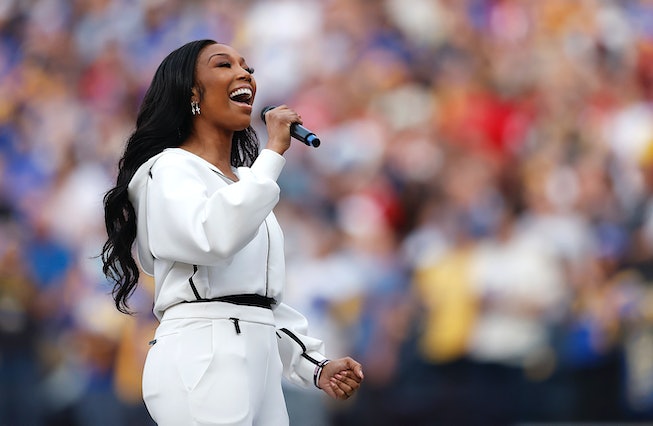 On Sunday, Jan. 30, Brandy opened the 2021 NFC Championship game between the Los Angeles Rams and the San Francisco 49ers, held at the SoFi Stadium outside of L.A. During her appearance, the B7 singer stunned football fans and viewers with a soulful rendition of “The Star-Spangled Banner,” as expected from the legendary songstress.

While singing her version of the national anthem, fans noticed that the Grammy award-winning vocalist also managed to pay homage to the late singer and her idol Whitney Houston, taking inspiration from Houston’s outfit at the 1991 Super Bowl performance. Back then, she wore a white tracksuit with Nike sneakers, and Brandy was seen on stage rocking a similar look. She donned a red, white, and black set from Prada, which she styled with a classic pair of white heels.

Ahead, check out the rest of our favorite celebrity looks from the past week, including Rihanna’s pregnancy announcement outfit (in vintage Chanel), Katy Perry’s cottagecore SNL performance, Dominic Fike and Hunter Schafer already matching outfits, and more.

Monday is off to quite an interesting start already – Rihanna is pregnant! Following a slew of fan speculation over the past few months, Rihanna showed off her baby bump while in New York City with her beau A$AP Rocky. In a series of photos by photographer Diggzy, the Fenty mogul was seen wearing a pink puffer coat from Chanel’s Fall 1996 collection. She also wore a bejeweled cross necklace with denim jeans and Chanel’s gold chain belt.

On the latest episode of Saturday Night Live, Katy Perry, styled by Tatiana Waterford, performed the acoustic version of her 2020 track “Never Really Over” donning a knitted blue cropped top paired with a stunning tulle skirt from Sporty-Tech Couture Collection by Windowsen.

Our favorite “maybe” couple was spotted while out and about once again. On Saturday, Jan. 29, the Euphoria costars were seen hand-in-hand leaving a dinner date at Craig’s in West Hollywood.

While Dominic Fike wore a brown zip-up hoodie with an all-black look, Hunter Schafer was seen matching in black, too. She wore a cropped hoodie over a leather jacket by Prada, paired with Agolde’s frayed denim shorts and Rick Owens high-top boots. Schafer then accessorized with a Prada backpack and tights from Mugler x Wolford.

Olivia Rodrigo was also spotted at the same event wearing Heaven by Marc Jacobs. The 18-year-old pop star wore a multi-colored striped cardigan, which was cropped and showed off her white bralette underneath. She then opted for a camo-printed mini skirt and a pair of knee-high platform Kiki boots in black.

During a night out in New York City, Euphoria’s Storm Reid was captured sporting head-to-toe Prada, including a ribbed catsuit with a puffer coat, black Monolith biker boots, and a white Cleo leather shoulder bag.

Rising “It” girl and model Iris Law was spotted out in London on Wednesday, Jan. 26, wearing a see-through netted top, showing off her white bralette underneath. She then styled her look with gray joggers and neon green UGG Tasman X boots, along with a green headscarf and statement earrings.

After a week without posting her recent outfits, Blackpink’s Jennie returned with a much-needed OOTD, wearing a fuzzy striped sweatshirt by Chanel paired with black pants. She accessorized with Chanel’s quilted pocket bag and Vivienne Westwood loafers. In the following slides, the K-pop starlet also wore Chanel’s “CC” mini dress over a white long sleeve top.

In Lizzo’s recent off-duty ‘fit from Tuesday, Jan. 25, the “Truth Hurts” singer was captured in Los Angeles rocking a laid-back look, including a black long-sleeve top tucked into dark wash denim pants from Tanya Taylor. She paired her “going-out” outfit with white pumps, a black Valentino handbag, and a pearl necklace.

While out in New York City on Tuesday, Jan. 25, supermodel Gigi Hadid wore an ultra-baggy look, including a gray polo shirt paired with loose-fitted pants and black low-top Converse sneakers.

While attending the virtual premiere of Alice for the 2022 Sundance Film Festival, Keke Palmer wore a flowy printed ensemble from Etro, with heels from Stuart Weitzman and accessories by Dean Davidson.

Paris Hilton was seen in New York City back on Monday, Jan. 24 wearing the dotted midi dress with crystal-embellished bows from Saloni’s Holiday 2022 collection. She paired her outfit with black frames, a fuzzy coat, and black boots.

Spencer’s Kristen Stewart was recently spotted outside of The Late Show With Stephen Colbert rocking not only a new layered hairdo but she was also seen wearing all Chanel, including a white button-down tucked into black pants. She then accessorized with a loose tie and heels, also by the French fashion brand.