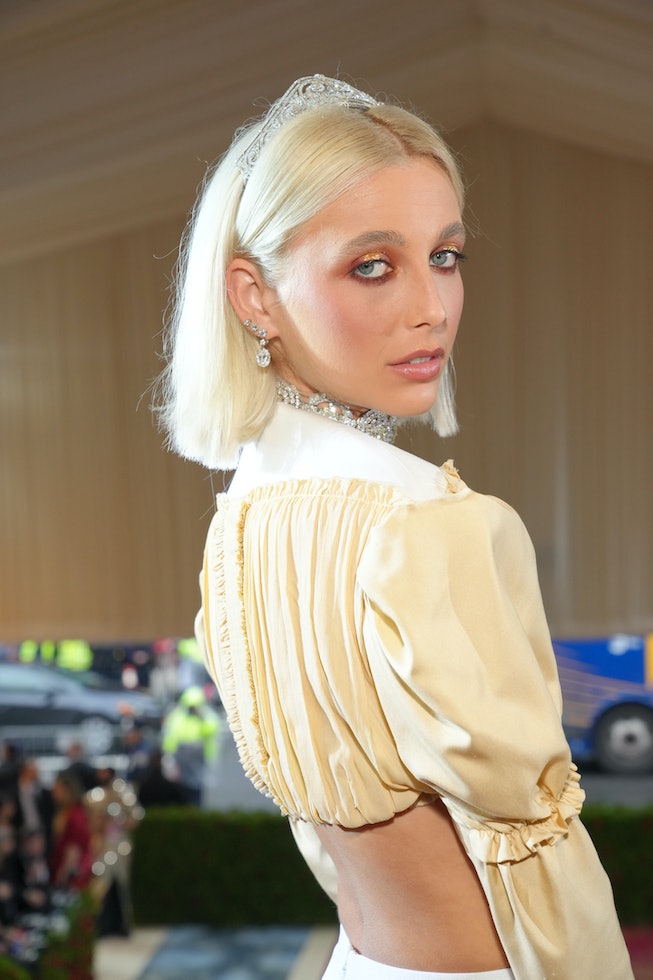 Emma Chamberlain stans, this is the moment we’ve all been waiting for. On Wednesday, June 22, the 21-year-old internet star made her first-ever appearance on The Tonight Show Starring Jimmy Fallon.

She made her late night debut to chat about her viral red carpet moment with Jack Harlow at the 2022 Met Gala, as well as promote her podcast Anything Goes and Chamberlain Coffee brand. Fallon also asked most important question of them all: What does she even do?

In the seven-minute clip, Chamberlain can be seen tackling the interview like the pro she is, and in style. Dressed by Jared Ellner, she opted for a baby blue button-up top designed by New York-based label Saint Sintra. She also donned this year’s biggest trend with a gray pleated mini skirt from The Frankie Shop, along with UNIF black knee-high boots that came with chunky platform heels and Cartier jewelry to complete her on-screen ‘fit.

Chamberlain shared her latest gig on her Instagram Stories on Wednesday night, posting screencaps of her interview and writing “Tonight?!” In an Instagram post the following morning from Saint Sintra, the brand wrote, “@emmachamberlain wearing Sintra for her first Fallon appearance last night, and a ginormous world bending thank you to you @jaredellner! Congratulations on a charming and fabulous interview Emma bb! Love you so much!!”

Chamberlain unveiled yet another surprise for her followers this week. Right before her interview with Fallon, she dropped a YouTube video that same morning, marking her first-ever vlog in six months since announcing her hiatus. The 17-minute video titled “what’s good in new york” showcases her trip to New York City as she asks strangers questions, visited the Empire State Building, revealed her fear of stepping onto subways, and checking rising indie fashion brand Dauphinette in the West Village, just to name a few. As Chamberlain has been making unexpected appearances over the past few months, where will we delightedly see her next?

You can watch Emma Chamberlain’s full interview on The Tonight Show Starring Jimmy Fallon, below.