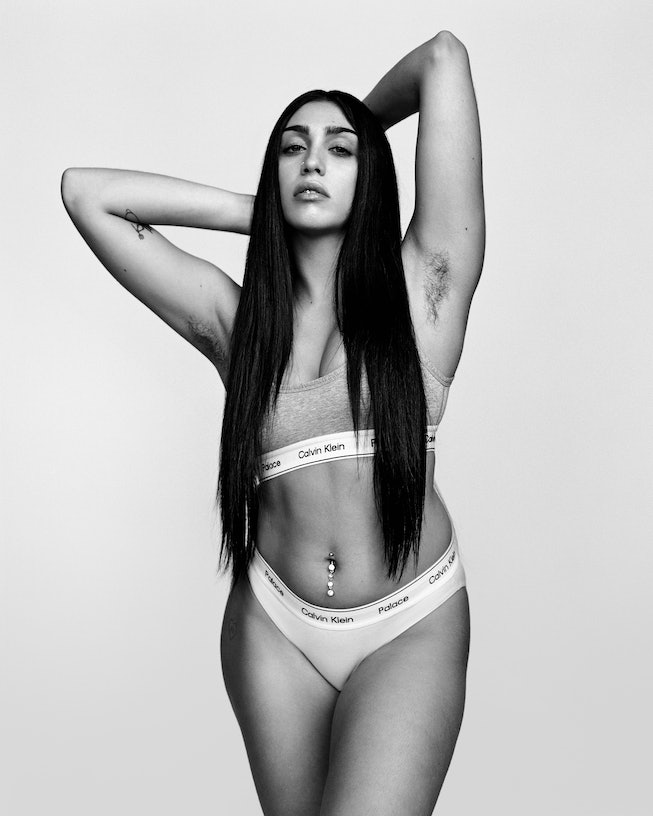 On Tuesday, April 5, the two brands announced their joint collection, titled “CK1 Palace,” via Instagram. The new campaign is said to be a love letter between their cities of New York and London, and features Lourdes “Lola” Leon and Precious Lee wearing the logo-adorned underwear sets and low-rise jeans from the soon-to-be released collection. Joining alongside Leon and Lee include actor Willem Dafoe, Dame Joan Collins, and the Pet Shop Boys, the Palace Skate family, and model Adwoa Aboah, just to name a few.

“I grew up admiring the iconic Calvin Klein campaigns of the early ‘90s for their simplicity and their forward-thinking depiction of fashion that appealed to everyone. It was so visually impactful: the casting, the energy, it really remains unmatched,” said Palace founder Lev Tanju in an official statement. “From the first call with the Calvin team, I knew there was so much we could do. This collaboration has grown organically and I’m proud of everything we’ve created together.”

The “CK1 Palace” collaboration between Calvin Klein and Palace is just another joint effort between a running trend of fashion brands teaming up on new releases. The partnership joins Gucci’s collections with Balenciaga, The North Face, and Adidas, as well as Fendi collaborating with SKIMS and Versace, among others.

With the new release from Calvin Klein and Palace expected to see out quickly, see everything we know about the “CK1 Palace” collaboration, below.

What is the “CK1 Palace” collection?

Calvin Klein and Palace’s new “CK1 Palace” collaboration takes on Palace’s playful aesthetic combined with Calvin Klein’s signature minimalist styles. The coveted launch is set to feature a number of classic underwear silhouettes and fleece-lined women’s underwear — a first for Palace — among other hypebeast-approved apparel, like faded ‘90s-inspired denim and oversized tees, with each design featuring a custom-made logo that intertwines the two brands. Other pieces from the collection include basketball jerseys and baggy shorts in colorways, like black, gray, and white, plus new hues, such as wheat and quarry. Palace has also joined forces with Vans to release a limited-edition design of “Calvans,” which boasts the “CK1 Palace” logo on the classic slip-on shoe.

The collaboration is also debuting a new version of the CK1 fragrance, marking the first time the perfume has been reworked by another brand. “I feel so lucky to launch our first-ever fragrance with Calvin Klein. CK1 disrupted the Status Quo and to be able to make a new version of it in a Palace way has been a dream,” said Tanju in an official statement. The fragrance is expected to have a twist on its signature warm and earthy base, adding new hints of scents like frosted mandarin, violet leaf, and oak moss.

Prices and sizing for the collection have yet to be revealed.

When and where can I buy the “CK1 Palace” collection?

Starting on Friday, April 8, the “CK1 Palace” collection will be available for purchase online at palaceskateboards.com and calvinklein.com, as well as at Palace retail stores in London, New York, Los Angeles, and Tokyo.

See the full campaign, lensed by Palace photographer Alasdair McLellan, ahead of the collection drop, below.

NEXT UP
Fashion
Jenna Ortega Is The Face Of Adidas’ Newest Line
Fashion
The Best Celebrity Fit Pics From Paris Men’s Fashion Week
Fashion
The Wildest Front-Row Looks From Couture Week In Paris
Fashion
Collina Strada & Vans Team Up For A Chiller-Friendly Collection
Style + Culture, delivered straight to your inbox.