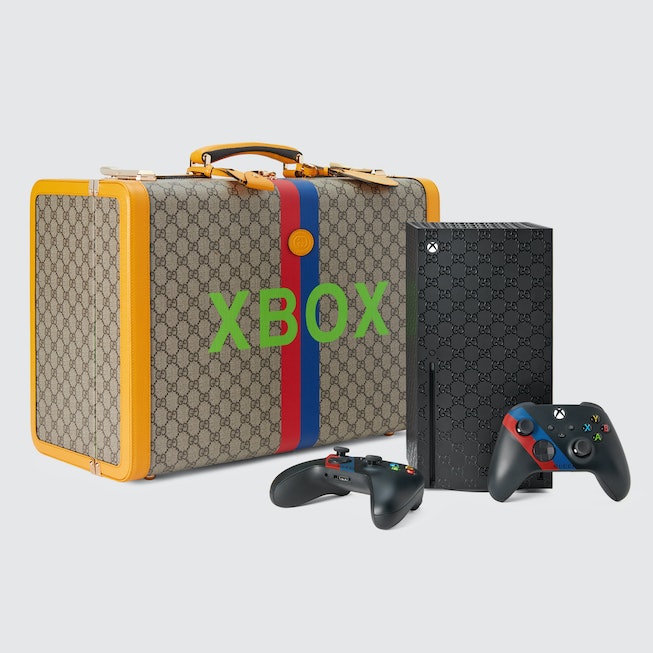 The fashion and gaming crossover is still going strong. After a certain Twitter exchange and rumblings of an upcoming collaboration, Gucci and Xbox confirmed the rumors with an official announcement on Friday, Nov. 12.

To celebrate both of their anniversaries, Gucci revealed its high-fashion take on Xbox’s Series X console, covered in a “GG” monogram — a play on “GG” or “good game” among gamers in the know. The bundle also includes modded controllers (did someone tell Timothée Chalamet yet?) and a Gucci luggage case lined with Xbox’s signature green shade. The limited-edition release also comes with a high price tag: With only 100 numbered sets available, each costs $10,000.

Gucci’s partnership with Xbox is the latest addition to the Italian fashion house’s foray into the gaming world. In October 2020, the luxury brand teamed up with The Sims for its “Off The Grid” campaign, and, in the fall of 2021, created its own “Gucci Garden” within Roblox so gamers can purchase and wear exclusive (virtual) items. (Its Dionysus bag even made its way onto the Roblox resale market, selling for 350,000 Robux, about $4,115. The real version retails for $3,400.) Gucci has also partnered with 100 Thieves, Animal Crossing, launched an Arcade App to virtually try on sneakers and watches, and also created a tennis-themed outfit for the game Tennis Clash.

Ahead, find out more about the Gucci Xbox bundle, when it drops, and where you can get it.

What’s in the Gucci Xbox bundle?

The Xbox Series X console features a GG-monogram pattern laser-engraved onto itself, along with a hand-numbered detail for each of the 100 sets available. The console also comes with two wireless controllers with Gucci’s red-and-blue signature stripe, as well as a Gucci archival luggage case covered in the luxury brand’s Supreme canvas with gold hardware details and yellow leather trim. The luggage also features Gucci’s colorful stripes, “XBOX” and “GOOD GAME” written on both sides, and a yellow leather key holder and luggage tag with both of the brands’ logos. Inside the luggage is Xbox’s bright green hue with various compartments to store the console, controllers, and other items to go along with it.

When and where can you buy the Gucci Xbox bundle?

See the Gucci Xbox bundle in more detail, below.