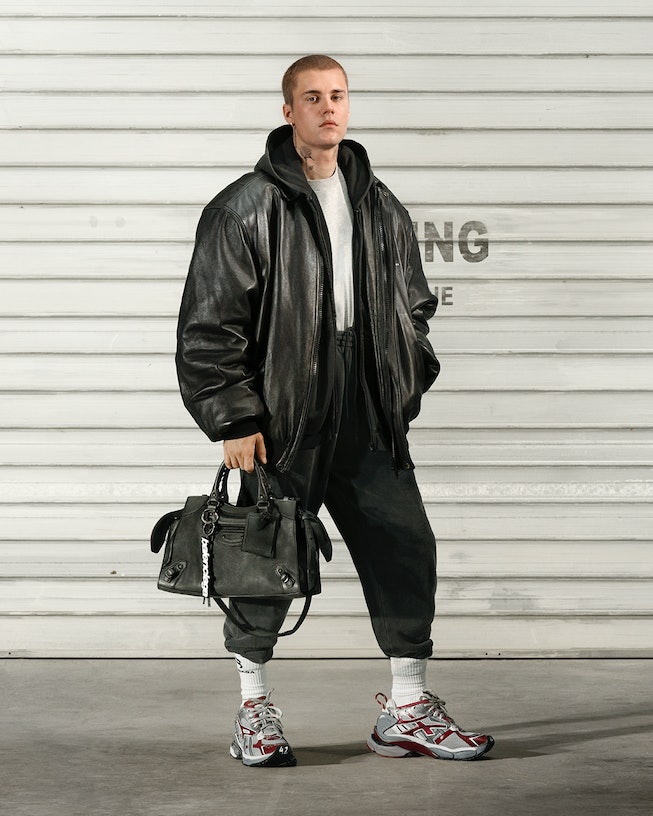 Justin Bieber is getting into the high-fashion game. The Justice singer stars in Balenciaga’s Fall 2021 campaign, wearing an oversized leather jacket with sweats, as well as the latest Runner sneaker silhouette and Neo Classic handbag.

His trip to Paris, back in June with his wife Hailey, makes a lot more sense now. Aside from meeting French president Emmanuel Macron, perhaps shooting this very campaign for the fashion house was the whole point of their stay all along.

Bieber is no stranger to major fashion gigs, but this Balenciaga deal could be his biggest one yet. In 2019, he made headlines for starring in a Calvin Klein ad with Hailey just after their South Carolina wedding, followed by getting his own solo campaign with the brand in 2020. His fashion line Drew House and its collaboration with Crocs has been a huge success, as well, often selling out within minutes of dropping online. And let’s not forget his Purpose tour merch from 2016, which made its way through a slew retailers, from Barneys to H&M to Forever21.

As for Balenciaga, the luxury brand has been having quite the year. Recently, it debuted the return of its couture collection in Paris, was “hacked” by Gucci’s Alessandro Michele, and brought back its Crocs collaboration by turning the classic clog into knee-high boots and — gasp— stiletto heels. Plus, this isn’t the first time Creative Director Demna Gvasalia has chosen a celebrity to officially promote the brand. Cardi B, a very vocal fan of the Balenciaga shoes “that look like socks,” took the internet by storm when her own billboard ad was on full display at the Louvre in September 2020.

See Bieber for Balenciaga’s Fall 2021 campaign in more detail, below.