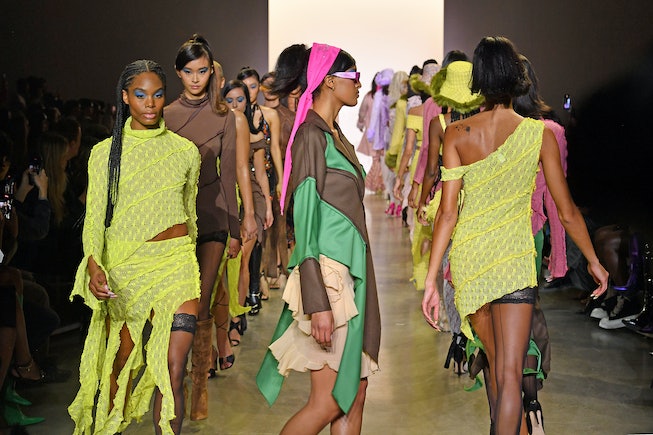 With August in full swing, New York Fashion Week will be here before we know it, with its Spring 2023 season slated to return from Friday, Sept. 9 through Wednesday, Sept. 14. Ahead of perhaps the busiest schedule we’ve seen in years, Afterpay — an official sponsor of NYFW — has recently announced its partnership with Asian-American designer Kim Shui to introduce the first crowdsourced runway garment for fashion week.

From Wednesday, Aug. 3, through Friday, Aug. 12, the public is invited by the brand to be an active creator by contributing a piece of digital art for Kim Shui’s upcoming runway show. The imagery submitted will contribute to one pixel of the garment, and the photos can be anything from a selfie, piece of art, a specific color, and more. Shui will personally choose and interpret hundreds of image submissions, and by using digital printing from her New York studio, she will then transfer images onto fabric and weave it into her Spring 2023 collection.

The final design of the pixel piece will be unveiled at the designer’s show on Monday, Sept. 12 during NYFW. Afterward, the one-of-a-kind design will be photographed and rendered into a commemorative NFT that will be shared with the contributors of the original fabric.

The New York-based label is also returning to its social-media-savvy roots this season by simultaneously sourcing the next wave of talent through a nationwide open casting call for models, stylists, and hair and makeup professionals for a chance to be cast for Shui’s show. “This season, I want to cast people into my show no matter who they are, where they are from, or who they know,” the designer stated via her website. The two projects mark the first foray of many to come between Afterpay and Kim Shui surrounding NYFW.

When asked about the partnership, Shui exclusively tells NYLON, “Our brand is inspired by our community and co-created on the internet. I liked this idea of having all these different pixels coming from people of different backgrounds making up a whole.”

She also adds: “The fact that this print would be transferred into a garment that will eventually walk the runway is powerful as there is an inherent sense of shared ownership. For me, it’s always been about bringing people together despite their differences. Together with Afterpay, we wanted to encourage community participation and connect people through this crowd-sourced garment. We’re giving every contributor co-ownership of the final print by airdropping them an NFT after the show.”

You can enter your imagery submissions for the pixel fabric here and headshots for a chance to walk in Kim Shui’s fashion show here until Friday, Aug. 12, at 11:59 p.m. PT.