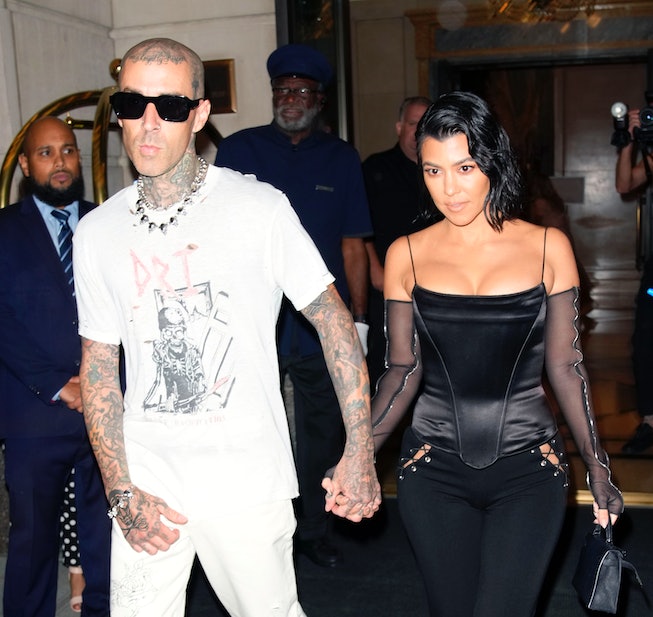 Kourtney Kardashian might have kickstarted a wedding dress trend. On Sunday, May 15, the reality show star and Poosh mogul married Travis Barker (yet again) in Santa Barbara, wearing a super-short white dress from Dolce & Gabbana, which featured a bustier-style top and a “bleeding heart” embellishment on the bodice. She paired her bridal look with a sheer bolero-veil top, matching long fingerless gloves, and a pair of black pumps. Barker stuck with his usual all-black aesthetic for his own groom outfit.

The two first tied the knot in a surprise ceremony in Las Vegas, but have now officially said their vows in front of a California courthouse. And while we’ve already witnessed not one, but two wedding looks from Kardashian, there are bigger plans for more. The PDA-heavy couple will reportedly hold an even bigger ceremony and get-together with friends and family in Italy very soon.

Ahead, check out the rest of our favorite celebrity looks from the past week, including Selena Gomez, Miley Cyrus, Doja Cat, and more.

After a stellar performance hosting the latest episode of Saturday Night Live, Selena Gomez attended her after-party in a Michael Stewart dress with a thigh-high slit and silver sequined heels.

Louis Vuitton presented its Cruise 2023 runway show in San Diego, Calif., with a star-studded front row, including Euphoria star Maude Apatow in a full look from the designer brand.

Ahead of JBL Fest in Las Vegas later this fall, brand ambassador Doja Cat wore Heaven by Marc Jacobs to perform at the JBL x DojaCat Soundcheck event at The Roxy in Los Angeles.