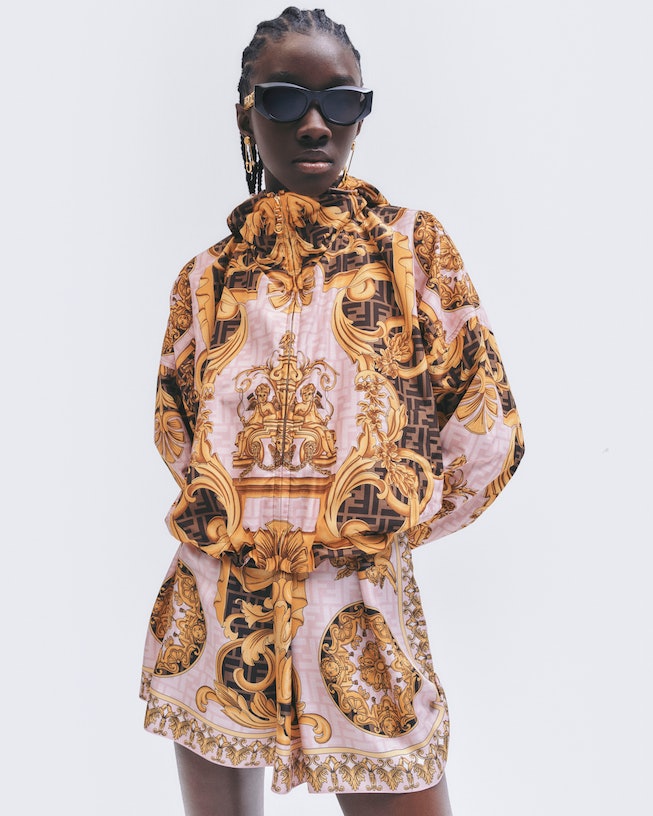 After Fendi and Versace dropped a surprise collaboration at Milan Fashion Week back in September 2021, the coveted collection is finally arriving in stores — and much sooner than you think.

Dropping in May, the anticipated launch consists of both brands’ classic silhouettes and design trops that were swapped and reimagined by creative directors Donatella Versace and Kim Jones. As seen on the catwalk during the Spring 2022 show, there will be a range of styles that channel their signature aesthetics, including Kim revamping Versace’s mid-to-late ‘90s era and Donatella applying her glam-punk know-how in the form of crystal-embellished pieces and lots of chunky gold embellishments.

Ahead of its release, the fashion houses dropped an accompanying campaign that welcomes fashion fanatics to the “Fendace” nightclub. Lensed by Steven Meisel and filmed by Alec Maxwell, the joint campaign includes a star-studded cast featuring Adut Akech, Amar Akway, Anja Rubik, Anok Yai, Imaan Hammam, and Lina Zang. They can be seen trying to enter the “Fendace” nightclub in dazzling outfits but are held up by the club’s bouncers at the door: supermodels Naomi Campbell and Kristen McMenamy.

“It’s a swap rather than a collaboration and, most of all, it is done out of friendship,” said Kim in an official statement. “It is the beauty of togetherness after time apart and a celebration of women who have inspired me so much.”

Donatella also added, “The campaign captures the same sense of friendship and energy we had when we were designing the collection. Kim is a visionary designer and innovator. To me, ‘Fendace’ will always mean love.”

With summer right around the corner, see everything you need to know about Fendi & Versace’s “Fendace” collaboration drop, including what to expect and how you can get your hands on it, ahead.

Fendi and Versace’s “Fendace” collection consists of vibrant styles that embody both Kim and Donatella’s visions for their respective brands’ classic designs. You can expect to see oversized hoodies, boxy tees, and fitted bodysuits, plus baggy shorts adorned with the “Fendace” logo. When it comes to footwear, the collab offers chunky golden sneakers, knee-high monogrammed boots, and a range of shimmery heels to fit just about any upcoming occasion.

We’ll also be seeing lots of new accessories on top of a fun, standout styles, including the “Fendace” Peekaboo and Baguette handbags, which combine Fendi’s iconic bags with Versace’s aesthetic, as well as the La Medusa handbag where the Fendi “FF” logo is remixed with Versace’s Medusa. There is also an all gold-chain mini bag, a monogrammed cap with a printed scarf attached, and an embellished belt. If you’re not into the mini bag trend, there are also maxi bags included in the roundup and perhaps our favorite item in the collection: a bejeweled “Fendance” tumbler!

Both pricing and sizes for the drop have yet to be released but if there’s anything we’ve learned from past designer collaborations like Gucci & Balenciaga’s Hacker Project, you might want to prepare both yourself and your wallet.

When and where can I buy the Fendi & Versace “Fendace” collaboration?

Fendi and Versace’s “Fendace” collection officially drops on Thursday, May 12, through a series of global pop-ups and events with the following locations being the only stores to offer the full collection: Dubai, Kuwait, London, Los Angeles, New York, Osaka, Paris, Shenyang, and Tokyo.

In addition, the collection will be divided between Fendi and Versace online and among retail boutiques, with Fendi presenting the “Versace by Fendi” collection while the “Fendi by Versace” styles are offered at Versace boutiques, along with the brands’ online stores at fendi.com and versace.com. A mini capsule line of the joint “Fendace” looks will also be up to shop at both fashion houses, respectively.

NEXT UP
Fashion
The Wildest Front-Row Looks From Couture Week In Paris
Culture
Loewe’s Howl's Moving Castle Collection Is An Anime Dream
Fashion
Collina Strada & Vans Team Up For A Chiller-Friendly Collection
Fashion
Jenna Ortega Is The Face Of Adidas’ Newest Line
Style + Culture, delivered straight to your inbox.