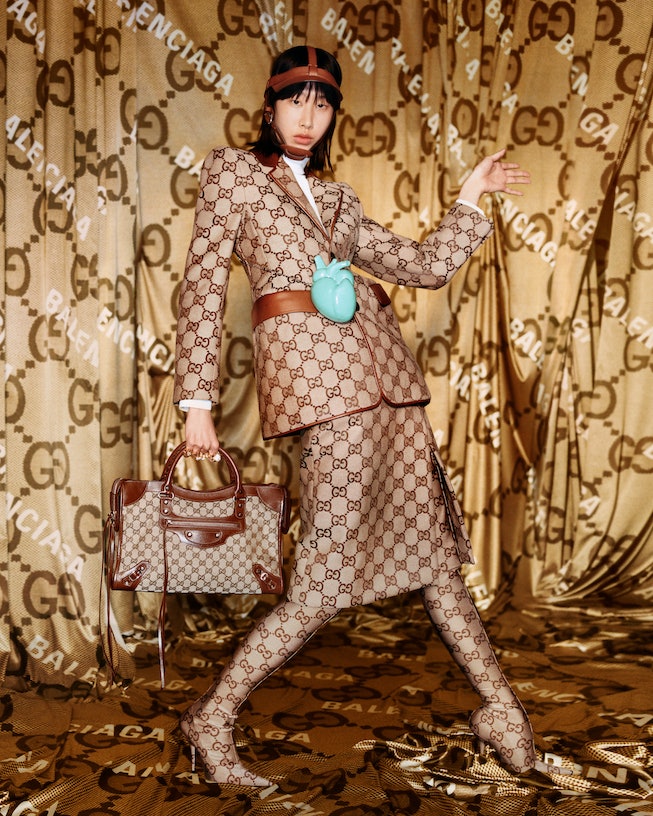 After showing fans a sneak peek of its surprise Gucci and Balenciaga collection in a short “Aria” fashion film in April, the two luxury brands have finally released the entirety of their “hacking lab.” The newly-dropped release follows a series of recent partnerships, like Gucci’s collaboration with Xbox and Balenciaga’s Paris Fashion Week film with The Simpsons.

Available now, the two fashion houses are kicking off the holiday season with a curated and limited-edition selection, titled “The Hacker Project.” Tapping into all-things logomania and vibrant patterns, Gucci’s Alessandro Michele reimagines Balenciaga’s classic silhouettes with a maximalist twist. The collection includes must-have pieces with a mashup of the brands’ logos and aesthetics, and it seems some eager shoppers have already gotten their hands on the collection, like the coveted Gucci x Balenciaga Hourglass bag.

The project was also inspired by a slew of key motifs that represent different aesthetics and moods, each one lensed by four different photographers: “Horse Racing Motifs,” “Gucci Lifestyle and Décor,” and “New Year’s Eve.” In light of the holiday season and “The Hacker Project,” Gucci is already getting into the holiday spirit with a series of pop-up locations featuring captivating and immersive shopping experiences in select cities starting Wednesday, Nov. 17.

Kick off your winter off with new additions to your wardrobe from the Gucci x Balenciaga collection. We’ve broken down what to expect and how to shop the highly sought-after (and already sold out) pieces, including the monogrammed City bags and logo-embellished jackets, below.

What is the Gucci & Balenciaga “Hacker Project” collection?

The Gucci x Balenciaga “Hacker Project” has a lot of standout ready-to-wear items at the moment perfect for the upcoming party season or more casual ‘fits, with even more coming soon. For starters, Balenciaga has launched a few pieces on its site so far, with most of them selling out, like the “BB” monogram socks ($210), the beige monogram “BB” cap ($495), and the Hacked “BB” puffer coats ($3,290). The rest of the “Hacker Project” is slated to come out soon, including canvas bags and laptop cases adorned with graffiti-sprayed words “This is Not a Gucci Bag,” monogram wallets and cardholders, belts, cashmere scarves, and more.

Gucci has also launched a more vibrant range of clothing items and accessories, with many pieces having the classic “GG” monogram remixed with Balenciaga’s logo. Treat your loved one (or yourself, for that matter) with a monogram Hourglass canvas jacket ($5,980) coming in beige and black, and you can even pair it with a matching maxi skirt ($1,980). There are also colorful floral-printed blouses ($2,700), blinged-out charm bracelets ($1,150), and we can’t forget monogram statement boots ($1,390). The coveted Triple S sneakers have also made their return in a new pattern ($1,290), and there are even more apparel and handbags available to shop online. Although this item calls for a hefty budget, the black-and-blue sequin hacker coat ($12,700) would be a surprise on anyone’s holiday wishlist, if Santa is so generous as to grant us that one.

Where can I buy the Gucci & Balenciaga “Hacker Project” collection?

With prices ranging anywhere from $210 through $12,700, you can now shop most of the pieces from the official Gucci and Balenciaga “Hacker Project” online at gucci.com, as well as select items on balenciaga.com, with more coming soon. The collection is also available to shop in-person at New York’s Meatpacking District, Miami Design District Paradise Plaza, Holt Renfrew Yorkdale. In addition, a number of pop-up locations in celebration of the holiday season will be open to shop for a limited time only, including places like New York Fifth Avenue, New York Wooster Street, Gucci Beverly Hills, Gucci Chicago, and Costa Mesa South Coast Plaza.

View the rest of the “Hacker Project” campaign images, lensed by photographer Harley Weir, below.