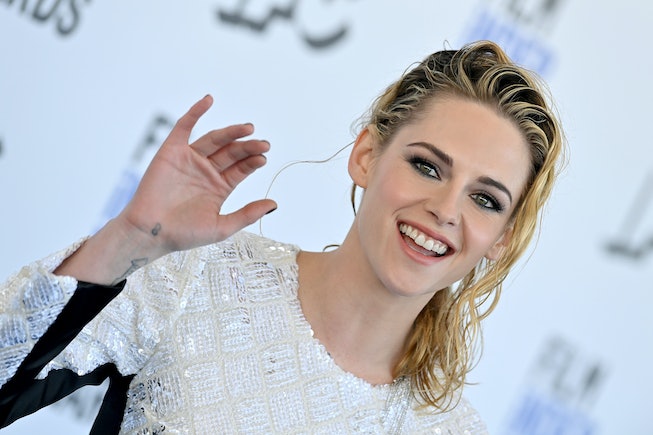 Awards season is officially underway and Kristen Stewart is making all of the red carpet stops ahead of the upcoming 2022 Oscars, for which she’s nominated for Best Actress for her leading role as Princess Diana in Spencer. Of course, Stewart is making the rounds dressed in Chanel, and over the weekend, she wore a total of two looks from her go-to French fashion house brand.

On Sunday, March 6, Stewart arrived at the 2022 Film Independent Spirit Awards as the ceremony’s honorary chair. For the special event, the Spencer star wore a white glittered top, which was adorned with a black satin bow at the waist, with matching white glittered crepe pants from Chanel’s Métiers d’Art 2022 collection. Stewart was dressed by her go-to stylist Tara Swennen, who also paired the outfit with black pointed pumps. She kept the rest of her red carpet look simple by opting out of jewelry and instead styled her outfit with Chanel’s Première Velours watch.

Earlier, Stewart also made an appearance at the 2022 Santa Barbara International Film Festival to receive the American Riviera Award presented by Charlize Theron. The actress wore one of Chanel’s Spring 2022 couture looks, featuring a crepe georgette top in black layered over a sheer black dress adorned with tulle and embroidered beads. She finished her look with fine jewelry, also by Chanel. Though this has to be one of our favorite Chanel looks from Stewart so far this year, there’s a likely chance that she’ll top it once she steps foot on the Oscars red carpet in a few weeks.

Ahead, check out the rest of our favorite celebrity looks from the past week, including Charli XCX’s spiky mini skirt, Dua Lipa’s Fuzzy Boots, Kim Kardashian in Balenciaga, and more.

While in New York preparing for her latest appearance on SNL, Charli XCX was seen leaving her hotel wearing a spiky top and mini skirt from London designer Chet Lo. She paired her colorful ‘fit with knee-high neon yellow boots and a Valentino bag in pink.

Actress Daisy Edgar-Jones attended the premiere of Hulu’s Fresh in Los Angeles wearing a Loewe metallic midi dress adorned with ruffle detailing at the slit on the leg, worn with a pair of white sandals.

With the second season of Euphoria wrapping up just last week, it seems that Angus Cloud has been out-and-about ever since. The actor, known for his role as Fez in the hit HBO Max series, attended Revolve’s Social Club opening party in Los Angeles wearing a matching plaid set from Burberry which he wore with white canvas sneakers and almost-knee high socks. Cloud completed his look with a beige hat from Kangol.

Kim Kardashian also attended Revolve’s Social Club event, too, opting for a full-on leather outfit from Balenciaga. She finished off her look with silver-framed sunglasses and a black Hourglass bag from the fashion house.

During the 2022 Billboard Women in Music event back on Wednesday, March 2, the “Woman of the Year” Olivia Rodrigo was spotted on the red carpet wearing a white dress from Area, which she styled with a three-belted harness at the waist and platform boots.

FKA Twigs was seen at the 2022 NME Awards in London wearing a sheer mini dress designed by Liza Keane, which she also wore with black strappy sandals.

Rina Sawayama also was spotted at the 2022 NME Awards in London, wearing a leather two-piece top and wrap skirt set from SRVC Studio. The Sawayama singer completed her red carpet look with sandals from By Far and jewelry from Justine Clenquet and Mi Manera.

Right before The Batman hit theaters over the weekend, Zoë Kravitz arrived at the film’s world premiere in New York City donning a strapless Catwoman-inspired gown. The custom velvet dress by Oscar de la Renta featured a cat-shaped lace-up corset at the bodice.

Gossip Girl 2.0’s Evan Mock attended The Batman world premiere in New York City wearing a white embroidered button-down under a purple leather jacket and black trousers. He completed his outfit with matching colored sneakers and a Batman mini bag around his neck.

Billie Eilish has officially switched back to her signature baggy ‘fits at the world premiere of Disney and Pixar’s Turning Red in Hollywood. The Happier Than Ever singer wore an oversized long-sleeve white top under a Gorillaz tee, which she paired with black joggers and R13 platform sneakers. She completed her red carpet look with a pointed plaid hat and silver accessories.