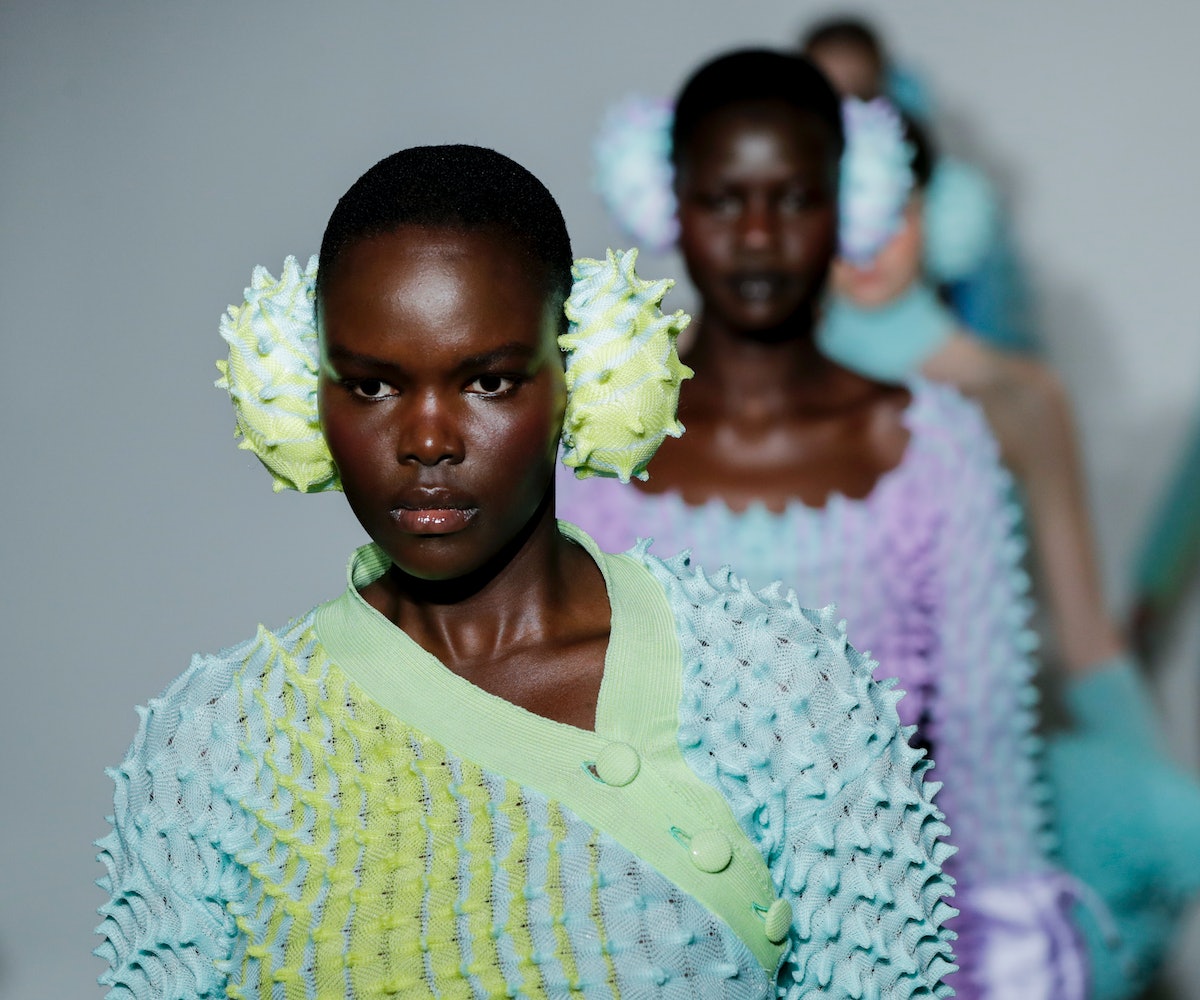 “I want to be stressed all the time!” Chet Lo exclaims as I witness his casting over Zoom, just two days before he presents his Fall 2022 runway show at London Fashion Week. For most designers, the run-up to show day delivers the most anxiety-inducing days of their seasons, but Lo thrives on it. Even though I’m not technically in the room, I can see that Lo’s taking it all in his stride, and his bizarre composure is having a knock-on effect on the team, who are busy crafting away on his new collection behind him. The energy is high. The vibes are good. And the giggles — there are a lot of them.

Fall 2022 marks Chet Lo’s second “official” collection: The CSM alum was picked up by Lulu Kennedy’s creative talent incubator, Fashion East, which has also supported the likes of HRH and Nensi Dojaka, just last season. But if you ask the designer himself, he never even imagined he’d be here. “I’ve gone on record so many times when I was younger like, ‘I never want a brand because it’s so much work,’” he explains. “And god, I was f*cking right because this is insane! But I love it. It was very organic and it just kind of snowballed.”

Lo, who interned under industry greats like Proenza Schouler and John Galliano at Maison Margiela, is known for a very specific signature aesthetic that can best be described by two singular words: sexy and spiky. His figure-hugging knitted garments, which resemble a kind of space-age version of the polarizing durian fruit, are spun from monofilament yarn before being transformed into the likes of dresses, cropped tops, and leg warmers. Though they look a little deadly from afar, you can’t help but want to reach out and touch them.

“I like pushing the boundaries, physically, of how we make stuff,” Lo shares. “When you’re in school, you have these grandiose ideas of what fashion should be. When you’re actually in the industry you’re like, ‘Oh, these clothes actually need to be worn by people,’” he adds. “Let’s see how far you can push a garment that is wearable to be sort of artistic at the same time.”

Those real people who wear Chet Lo’s spiked creations include Doja Cat, SZA, Rico Nasty, Dua Lipa, and Willow Smith, and when I ask him how he’d describe the embodiment of his brand, he puts it succinctly: “A bad b*tch! I want everybody to feel sexy when they wear my clothes.”

Though his roots lie in Hong Kong, Lo was born and raised in New York before arriving in London, and naturally, these three cities form a trinity of endless inspiration for the designer. “I like to reference my heritage in everything I do. It’s just how my brain works,” Lo says. “I love referencing different silhouettes, but I also think there’s a very Asian aesthetic to my textiles and to how I work with textiles. There are a lot of subtleties I work with.” Team that with the ingenuity of London’s creative scene, and the subversiveness of New York City, and you’ve got a recipe for one hell of a collection, as Lo proved with his Fall 2022 lineup, aptly titled “The Tundra.”

“This is very autumn/winter,” he goes on to explain. “The vibe is very ‘a hoe never gets cold,’ so we still have micro skirts — but very warm micro-skirts.” Alongside those knitted micro-minis, Lo unveiled cropped tops and tight-fit dresses, punctuated by asymmetric necklines, thigh-skimming slits, and cutout details. If that all sounds a little more summer than skiwear, the accessories are where Lo really took his seasonal inspiration to a new level. There were oversize scarves, puffy arm warmers, Yeti boots, snow bunny bags, and the ultimate winter accessory: earmuffs — all in gradient pastel hues of icy blue, baby pink, frosty lilac, and a blindingly bright yellow.

This season, Lo also deferred ever-so-slightly from his signature spiky knit, introducing a satin puffer fabric, faux fur, and marabou feathers into his repertoire, which brought more depth to his silhouettes and delivered some much-needed weather-appropriate flair. “It’s very wintery; kind of aprés-chic,” the designer acknowledges. “I’m picturing champagne and a Jacuzzi in the mountains.”

With two seasons of London Fashion Week under his (presumably spiky) belt, Lo is looking back to how he’s evolved as a designer over the past few years, whilst also keeping one eye on what’s yet to come. “In my first season, I was very much like, ‘Let’s just make crazy sh*t,’” Lo reflects. “Now I’m more about how I want to make people feel when they actually wear garments.”

No doubt he’ll be back with another show-stopping — and surprisingly wearable — collection come September, but that’s not all he’s got planned. Like a true Gen Z multi-hyphenate, Lo’s determined to translate his vision across various industries. “I want to explore different areas of design. I just want to do it all. I don’t want to be stuck to one industry,” he admits, laughing. “I want to just make sure that I’m not getting comfortable. I don't ever want to be comfortable.”