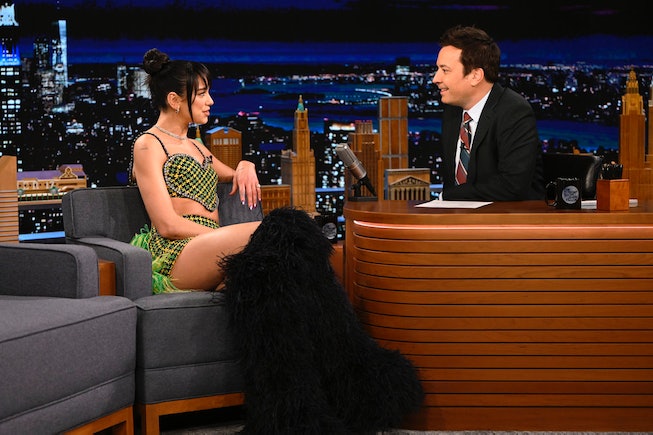 Have you heard or, better yet, seen? Mini skirts are everywhere right now. From the Fall 2022 runways to celebrity outfits, the tiny silhouette is a massive trend, and the latest famous face to try on the look is Dua Lipa. The pop star took a break from her Future Nostalgia tour to stop by The Tonight Show Starring Jimmy Fallon, wearing a designer couture ensemble that just made its debut, too.

On Thursday, March 3, Lipa wore head-to-toe Area for her late-night appearance. The New York fashion brand had just revealed its second couture collection in early February and the Spring 2022 look, pulled by the singer’s go-to stylist Lorenzo Posocco, had plenty of Area signatures to love. The heart-shaped tweed top in a yellow-and-green houndstooth featured crystal trim, as well as her matching mini skirt, which was also adorned with green and yellow feathers.

But what really made this look stand out was her thigh-high platform boots made up entirely of black feathers. The “Love Again” singer is no stranger to a statement boot (her Moon Boots are proof), so who better to pull off this daring footwear choice than Lipa herself? She finished her outfit with a few sparkling diamond jewelry pieces from Bulgari.

On The Tonight Show Starring Jimmy Fallon, Lipa chatted with Fallon about working with Elton John, her newly launched concierge newsletter, called Service 95, and more. She also talked about her now-viral on-stage “lazy” dance that has now transpired the meme “go girl give us nothing!”

“I’ve brought it back. I’m doing it on my tour. I’m reclaiming it because there was a moment where, actually, it caused me a lot of grief, like I was being bullied online, it wasn’t very nice,” recalls Lipa. “But now I can look at it from a different perspective. I look back on it with such fondness because it helped me grow into the artist that I wanted to become.”

Naturally, Fallon asked Lipa to show the audience (and viewers everywhere) right then and there, to which she happily obliged in her very on-trend designer couture outfit.