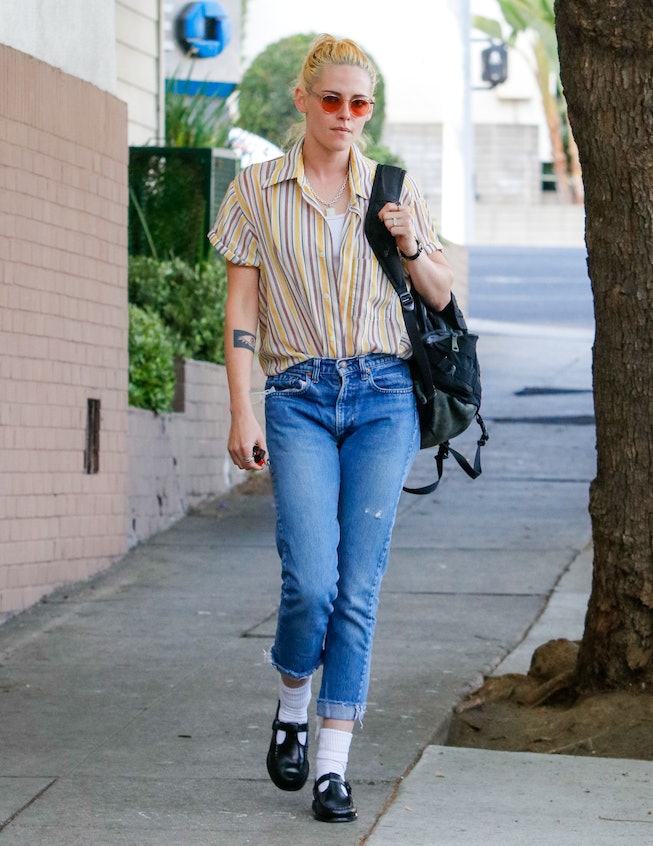 When it comes to accessories, Kristen Stewart is known to stick with a few timeless closet staples. There’s, of course, her signature padlock necklace, usually a cool pair of sunglasses, and lately, she’s often been spotted styling her outfits with a pair of slouchy white socks.

On Wednesday, Oct. 20, Stewart was seen out in Los Angeles channeling “dadcore” vibes in a casual ‘fit, opting for a striped button-up top loosely tucked into her jeans, and exposing a bit of her white tank underneath. She cuffed her jeans just enough to show her black Hereu loafers and a pair of white socks scrunched right at the ankle. The Spencer actress then accessorized her outfit with a large black backpack, stacked silver rings, Garrett Leight sunglasses, and a Jillian Dempsey-designed necklace inspired by her padlock jewelry that has lip tint (!) inside.

Stewart’s preppy styling trick of pairing white socks with shoes has made an appearance on the actress quite a few times before. She recently dressed up the look while attending Chanel’s Spring 2022 runway show at Paris Fashion Week with a pink tweed blazer-and-skirt set, a black lace corset, and a pair of black loafers. Similar to her off-duty outfit, Stewart also attended the 2021 Telluride Film Festival back in August showing off more of her personal style in a relaxed black-and-white cabana top over a white tank from Re/Done. She cuffed her denim jeans from Levi’s and wore short white socks with a pair of red creepers from T.U.K. Footwear.

If you’re looking for ways to spice up the basic white sock, leave it up to Stewart for your latest fashion inspiration, as she’s often seen styling pieces in different ways all year round.

View Kristen Stewart’s off-duty look featuring her beloved fashion accessory in more detail, alongside her most recent outfits, below.