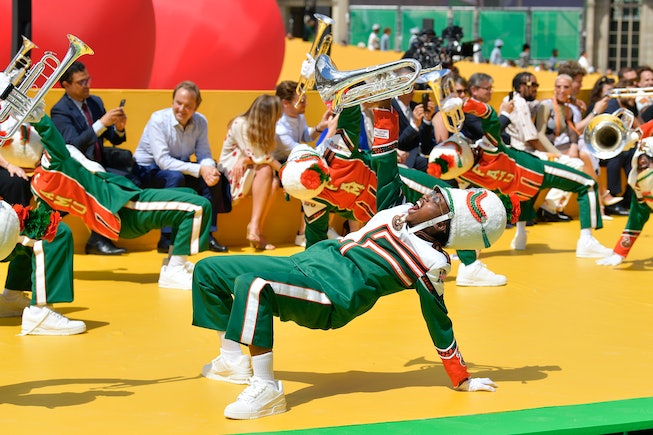 Paris Fashion Week Men’s is in full swing and Louis Vuitton just debuted perhaps the most elaborate runway show of the season. Following its latest Resort 2023 presentation and its Spring 2022 “spin-off” menswear runway show back in December, the Paris-based fashion house showcased its Spring 2023 men’s collection on Thursday, June 23, which takes inspiration from the playful nature of imagination and the late Virgil Abloh’s creative vision.

As music plays a large role in previous Louis Vuitton runway shows, the latest event opened with an exciting performance from Florida A&M University (FAMU), a historically Black university located in Tallahassee, and its famous Marching 100. As models arrived on the catwalk, Kendrick Lamar rapped tracks off his new album Mr. Morale and the Big Steppers straight from his front-row seat, adding in tributes to Abloh throughout his own performance.

We won’t spoil everything but in case you’re having some FOMO and are looking for the best highlights, see some of our favorite moments from Louis Vuitton Men’s Spring 2023 runway show in Paris, below.

Is it really a Louis Vuitton show without an extravagant runway venue? The fashion house took over Carré du Louvre in the middle of Paris to debut its Spring 2023 men’s collection, turning the venue into a life-size children’s toy racetrack. The elevated yellow catwalk — an homage to Abloh’s yellow brick road concept — featured gigantic red balloons marked with Louis Vuitton’s signature logo, pops of green stairs, and rollercoaster-like loops throughout.

Louis Vuitton invited some of the industry’s biggest stars from all professions to attend the Spring 2023 presentation IRL, including Justin Timberlake and Jessica Biel, Ella Emhoff, and supermodel Naomi Campbell. Musicians were also on the guest list, including rappers Lamar, Tyga, and Latin pop star J Balvin, along with actors like Édgar Ramirez, Kang Dong Won, and many others.

Ahead of the runway show, Louis Vuitton presented a short prelude film for those watching online. Directed by Ephraim Asili and a musical score by the Sun Ra Arkestra, “Strange Math” explores the collection’s themes of imagination and reality, along with imagery that relates the creation of music to scientific discovery.

Afterwards, the soundtrack for Louis Vuitton Men’s runway show transitioned to a live performance by FAMU’s Marching 100. With musical direction by Benji B, the Tallahassee-based marching band dominated the runway for the beginning and end of the show, while a seated Lamar paid tribute to Abloh with four songs from his own catalog, including the track “Savior” from his latest album Mr. Morale & the Big Steppers.

Louis Vuitton Men’s Spring 2023 Show: The Runway Collection Was A Bold Play On The Theme

Made from upcycled materials, the Spring 2023 men’s collection boasted extravagant silhouettes, ranging from signature monogram pieces to vibrant floral prints, along with cameos from avant-garde motifs like paper planes and fortune cookies.

Statement accessories were also included in the runway mix, as outfits were paired with over-the-top pieces, including colorful hats, sculptural handbags, and kidcore-inspired sneakers. The fuzzy bucket hat trend still remains strong, coming in a slew of neon hues, and monogram duffle bags and square suitcases were also on our radar. But in our opinion, the star of the show was the brand’s whimsical-shaped bags, with some designed to be the shape of trucks, fortune cookies, paper boats, and more.