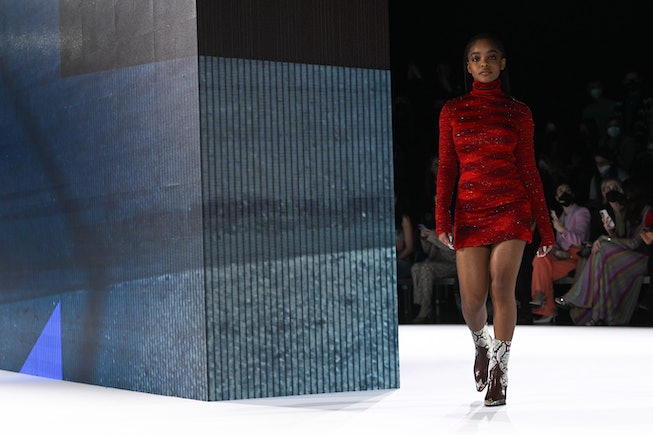 Surprise celebrity appearances on the runway seem to be a big trend at Fashion Month this season. The latest famous face to make a major catwalk debut is Marsai Martin, the 17-year-old Black-ish star and recent nail brand founder, who modeled in Missoni’s Fall 2022 show during Milan Fashion Week.

“First time’s a charm (thank the lawd) ✨MFW #Missoni #MissoniFallWinter22 thank you for having me :),” wrote Martin in a recent Instagram post of her debut. Though this is her first time walking for Missoni, it isn’t her first time wearing the Italian house. At the 2021 AMAs, Martin wore a gown featuring the brand’s iconic zig-zag motif. Following her fashion week gig, Martin starred in Hollister’s “Respect The Jeans” campaign alongside her own dad, Joshua.

Martin joins a growing list of celebrities who graced the catwalk for the first time ever during Fashion Month Fall 2022 so far, including Julia Fox and Chloe Cherry, who both appeared in LaQuan Smith’s show in New York, as well as Flo Milli (for Tia Adeola) and Ottessa Moshfegh, the author of My Year of Rest and Relaxation.

NEXT UP
Fashion
Apple Martin Is A Chanel Girl Now
Fashion
The Wildest Front-Row Looks From Couture Week In Paris
Fashion
The Best Celebrity Fit Pics From Paris Men’s Fashion Week
Fashion
Rosettes Are 2023’s Biggest Trend — Here’s How Celebs Wore Them in the 2000s
Style + Culture, delivered straight to your inbox.