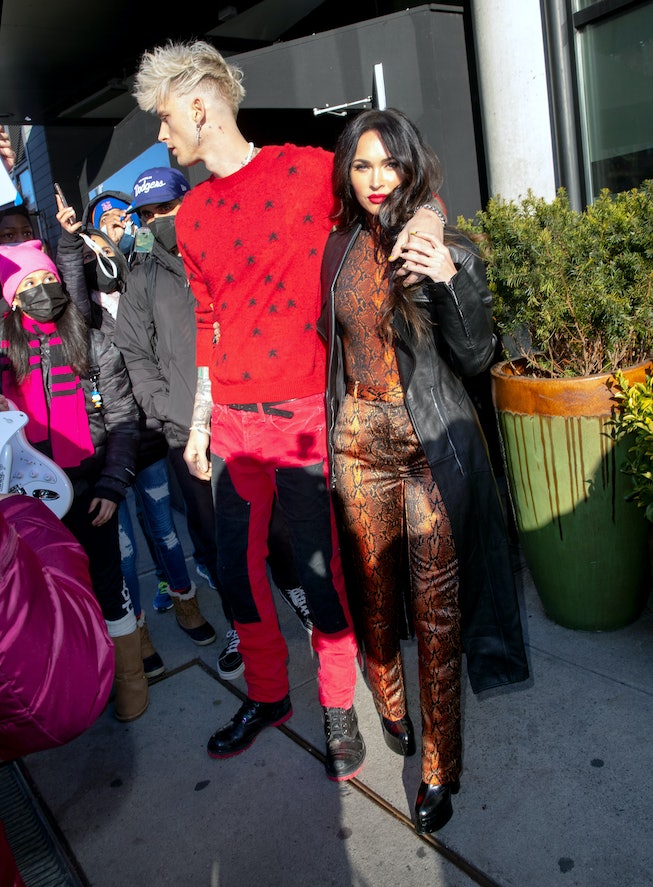 Few people are having as good of a start to 2021 as Megan Fox and LaQuan Smith. Smith has already dressed the Kim Kardashian for her latest KKW Fragrance campaign, designing three custom metallic looks for the ads. Meanwhile, Fox has been more in love than anyone else on this earth before her, flaunting her blossoming relationship with Machine Gun Kelly.

To cap off the first month of the year, Smith and Fox (and their respective good fortune) have finally collided. The actress was in New York for MGK's SNL appearance, posing outside 30 Rock with the musician while wearing a full snake-print LaQuan Smith look. Fox gave her Smith ensemble the Instagram stamp of approval, posting photos with Machine Gun Kelly carrying her out of the studio. Can't risk getting the LaQuan Smith dirty!

"SNL week," she wrote. "Best performance that show has ever seen."

Fox and Smith may have wrapped up January on a high note, but they're not the only ones. Ahead, we rounded up our favorite celebrity outfits from the week, including Demi Lovato's logomania, Gigi Hadid in Jacquemus, Billie Eilish's slime-green look and more.

Demi Lovato lounged around in a silk Balenciaga set.

No one has ever looked better getting an oil change than SZA in platform heels and denim cutoffs.

Hailey Bieber stepped out in a Balenciaga look while grabbing a coffee in L.A.

Olivia Rodrigo is a fan of the fuzzy bag trend, too.

Gigi Hadid went back to work in Jacquemus' white jeans and a crop top.

Dua Lipa took some selfies in Marc Jacobs' "Be Happy Be Lucky" sweatshirt.

Halsey announced her pregnancy in baggy jeans and a knit rainbow bra.

Supermodels Naomi Campbell and Christy Turlington posed for photos in their off-duty looks outside of the Fendi couture show.