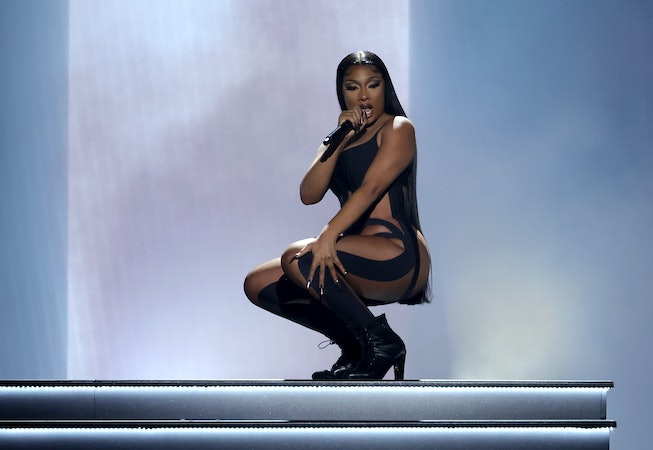 After teasing “Plan B” at Coachella 2022 and officially dropping the new track shortly after, Megan Thee Stallion’s latest hit single finally gets its own music video, along with some major high-fashion looks from Mugler.

Ahead of its official debut on Thursday, June 2, Creative Director Casey Cadwallader, who also co-directed the video with John Miserendino, teased the release with a short clip on his Instagram account, showcasing Megan in the French fashion brand’s signature body-hugging garments. On Twitter, the rapper shared her new work with the caption, “Mugler Meg 🖤.”

We’ve seen Megan as a Mugler muse before, as she wore the designer label to the 2022 Billboard Awards, both on the red carpet and on stage for her live performance of “Plan B” and “Sweetest Pie.” For the video, Megan is seen wearing multiple Mugler custo looks, including a sheer paneled bodysuit with printed jeans and a cropped blazer top, a similar bodysuit with thigh-high stockings, as well as a headpiece designed by famous milliner Stephen Jones.

Megan’s fashion star has been on the rise for a while now. In addition to her Mugler partnership, she recently sat front row at Balenciaga’s Spring 2023 runway show in New York, starred in multiple Coach campaigns, signed a brand deal with Nike, attended the Met Gala with Moschino, and collaborated with Fashion Nova.