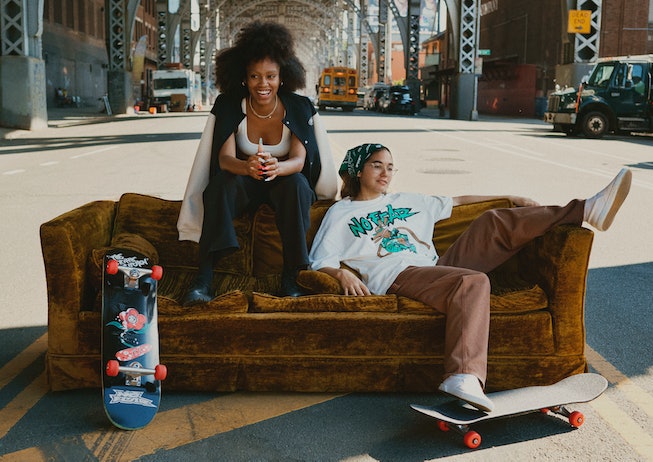 Channel the ultimate skater aesthetic with H&M’s newly launched collaboration, in partnership with the recently-relaunched brand No Fear.

H&M released a new collection for Fall 2021 alongside No Fear, the American skate and streetwear brand that reached peak popularity back in the late ‘90s and early 2000s. Inspired by the fearless Y2K skater culture, the campaign also stars the all-female, New York-based skate crew The Skate Kitchen, who also star as the cast of HBO’s hit TV show Betty.

The No Fear x H&M collection taps into the concept of risk-taking and features a wide array of unisex athleisure-inspired silhouettes, ranging from oversized graphic tees, knitted sweaters, color-block varsity jackets, matching hoodies and joggers, cropped tops, and more. As for accessories, the new launch includes a variety of statement pieces, like paisley-patterned scarves, canvas sneakers, beanies, and stickers (just to name a few). Not to mention, the apparel line also consists of vibrant hues while some of the co-created pieces by The Skate Kitchen come in neutral tones, like beige, khaki brown, washed black, and white.

“It feels amazing to re-launch No Fear with the collaboration with H&M and co-create some pieces with The Skate Kitchen,” said Hamish Morjaria, Head of Brand Partnerships and Licensing at No Fear, in an official statement. “We’re especially proud to add our voice to the next generation, encouraging them to be themselves and fight for what they believe in with a ‘No Fear’ ethos backing them up.”

“Together, they speak up for inclusion with the aim of a better and more equal world Fearless in the face of new challenges, The Skate Kitchen is willing to try out new things and own it,” added Rachelle Vinberg, a member of The Skate Kitchen. Everyone is scared, but the No Fear mindset is to look fear in the eyes and go for it.”

“We’re thrilled to be collaborating with No Fear and partnering with The Skate Kitchen for this confident, empowering collection. The silhouettes balance oversized with tighter fits, all with a relaxed, unisex vibe, while the graphic logos and subtle varsity touches are key,” said Emily Björkeheim, H&M’s Head of Design Divided in a press statement. “We hope that young people around the world take the message of this collaboration to heart — write your own rules and don’t let fear stand in the way of your dreams.”

Available starting Thursay, Oct. 14, you can now shop the No Fear x H&M collection in stores worldwide and online at hm.com. In the meantime, you can also view the campaign, starring The Skate Kitchen’s Rachelle Vinberg, Ajani Russell, Ardelia “Dede” Lovelace, Moonbear, Brenn Lorenzo, and Jules Lorenzo, in more detail, below.