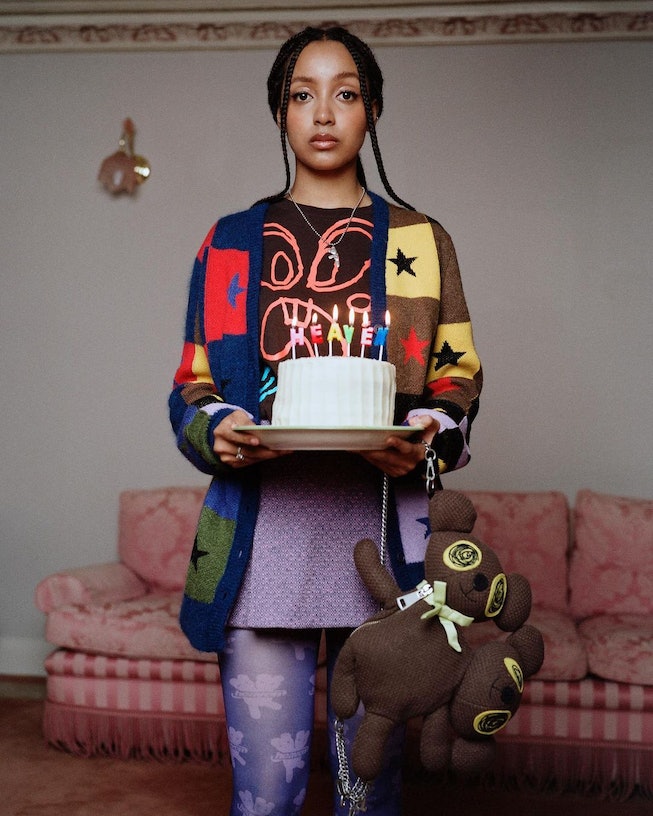 Shortly after releasing her highly-anticipated debut mixtape To Hell With It on Friday, Oct. 15, PinkPantheress is now modeling for Heaven by Marc Jacobs. This is the first major fashion gig for the viral musician.

On Tuesday, Oct. 19, the beloved Gen-Z line revealed the singer as its new muse via Instagram, and she now joins its star-studded roster of alt-pop singer Beabadoobee, “It” girl Iris Law, supermodel Bella Hadid, and rapper Teezo Touchdown. This announcement comes after Heaven released its new collection in collaboration with the cult classic film The Virgin Suicides.

Photographed by Larissa Hofmann and styled by Danielle Emerson, PinkPantheress gazes into the camera as she’s seen standing inside of a living room wearing a multicolored knit cardigan paired with a brown graphic top, a lilac mini skirt, and printed tights. She’s also holding a candle-lit cake (celebrating her first-ever fashion campaign, perhaps) while carrying the brand’s signature teddy-bear bag. In the next slide on Instagram, she changes her top into yet another graphic tee, with a teddy bear and the word “blissful” stamped on it this time.

There may not be much that we know about the 20-year-old singer as of yet, whose real name is still a mystery to the public, but the UK-based singer and producer is quickly climbing her way into the spotlight as the most-streamed artist at the moment. Known for her delicate pop vocals and new take on garage music, her songs “Just For Me” and “Pain” first gained popularity through TikTok, garnering millions of streams on the app alone. But it seems that PinkPantheress is also bringing back a new wave of early-2000s MySpace-era nostalgia as seen on her official blog, and it’s only a matter of time before we see her gaining more attention through fashion, too.

See PinkPantheress as the new face for Heaven by Marc Jacobs in more detail, below.