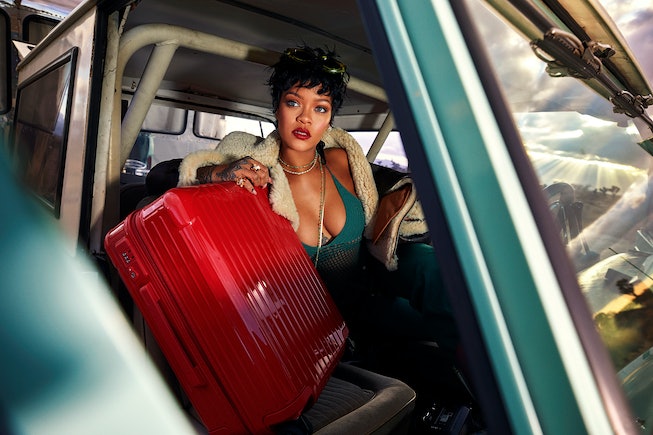 In the campaign, Rih is serving plenty of travel style inspiration. In the new photos, she’s seen navigating the desert wearing a shearling coat over a knitted halter top and green sunglasses, with a red, hard case Rimowa suitcase in hand. In a separate image, the billionaire baddie also rocks a multicolored ensemble with a fur bucket hat and a white crossbody travel case from the brand. Finding a moment of stillness and solitude is crucial for Rihanna and her never-ending frenetic schedule. (Indeed, this campaign debuts just after her memorable 2021 Met Gala appearance and after party.) “When everything is minimized, you see what’s important,” she said in official statement.

Rimowa’s global campaign captures the star-studded cast as they travel to eight destinations, like Tokyo and New York City. Smith also narrates (and stars in) her first-ever brand campaign with an original poem entitled “Never Still.”

“Inspired by the seismic global changes of the past two years, the ‘Never Still’ campaign’s narrative probes important questions about the new role that travel will play in all of our lives, “ Hugues Bonnet-Masimbert, CEO at Rimowa, said in a press statement. “As we look to the future, we follow the example set by our four icons, who have each used this period of pause to recalibrate their expectations and experiences of travel into something even more meaningful. Rimowa has always believed in purposeful travel, a value that carries even more importance today as we move into this exciting next chapter.”

NEXT UP
Culture
The Cutest Couples At The 2023 Grammys
Fashion
Jenna Ortega Is The Face Of Adidas’ Newest Line
Fashion
The Wildest Front-Row Looks From Couture Week In Paris
Fashion
Collina Strada & Vans Team Up For A Chiller-Friendly Collection
Style + Culture, delivered straight to your inbox.