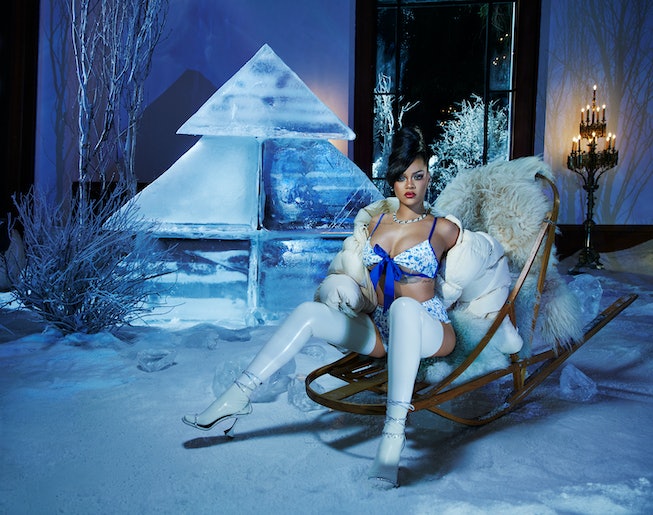 So far, 2020 has not brought us new music from Rihanna, but it has brought us many a Savage X Fenty campaign, and for that, we are grateful. For the lingerie brand's December campaign, Rihanna herself wears white latex thigh-high boots, along with Savage X Fenty's Plush Velvet Tie Front Bra and Plush Velvet Peek-A-Boo Tie Back Sleep Short.

The upcoming collection will drop on Tuesday, Dec. 1, with new styles and a new XTRA VIP box, which includes a push-up bra, side-tie sleep shorts, and a cut-out panty with a velvet rose print.

It's been a good year for Savage X Fenty. Megan Thee Stallion recently starred in its holiday campaign, curating a special collection of gift-worthy lingerie pieces, and in October, the brand debuted its first men's collection during the Savage X Fenty Vol. 2 Show. After the event, which featured Lizzo wearing a blue lace lingerie set, searches for "blue lingerie" immediately spiked 96 percent, while searches for the brand increased 101 percent.

Rihanna tapped Savage X Fenty model Christian Combs as the ambassador for the men's collection, which as of now is, unsurprisingly, sold out.

"I wanted to create menswear styles that everyone can wear," said Rihanna. "And after Christian did such a great job at the 2019 fashion show wearing men's, I knew we had to have him as a collaborator."

Check out Rihanna in the Savage X Fenty December campaign, below, and shop it on Tuesday, Dec. 1, on the brand's website.

NEXT UP
Fashion
Salehe Bembury’s Coveted Crocs Are Back Again, Here’s How To Get A Pair
Fashion
Paloma Elsesser Launches First-Ever Plus-Size Collection With Miaou
Fashion
How To Wear 2022’s Biggest Denim Trends, According To A Stylist
Fashion
Rosalía Stars In New SKIMS Campaign