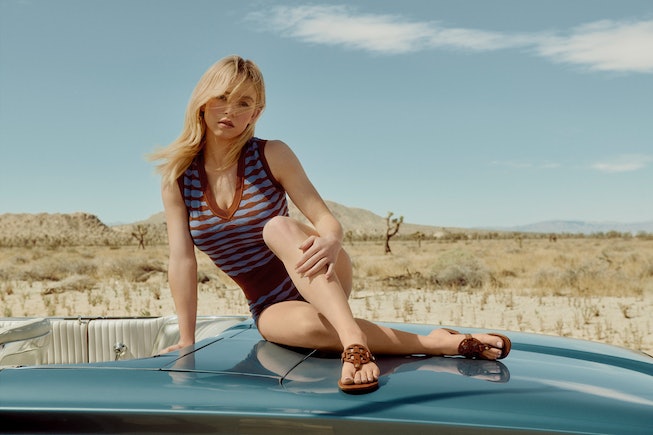 We might not be getting the third season of Euphoria anytime soon but that isn’t stopping Sydney Sweeney from keeping busy. The actress kicks off June by starring in a new campaign for Tory Burch for summer. Though Sweeney has modeled for the brand before, this markets her first campaign as an official ambassador, repping its handbags and shoes since April.

In the new campaign video, directed by Charlotte Wales and titled “Show Me Your Millers” — an homage to the cult-favorite sandal that was designed in the early 2000s — Sweeney can be seen cruising through the west coast desert in a baby-blue vintage convertible. The 24-year-old actress and producer is spotted packing the trunk of the car and fixing its undercarriage, all while dressed in her T Monogram tool belt, a slew summer-ready ‘fits (styled by Mel Ottenberg), a pair of on-trend colored aviators, and, of course, Tory Burch’s signature sandals.

Since debuting as Cassie in the breakout hit Euphoria in 2019, Sweeney has since been piling on quite a few fashion-related gigs. After the show’s second season finale in February, Sweeney appeared in her first campaign with Miu Miu. She also was the face of Guess last year, appearing in a campaign that paid tribute to the late Anna Nicole Smith, and starred in Parade’s Silky Mesh campaign back in June 2021.

You can now shop Tory Burch’s Miller sandals exclusively online at ToryBurch.com. In the meantime, check out Sydney Sweeney in the new “Show Me Your Millers” campaign video, plus the official images, below.